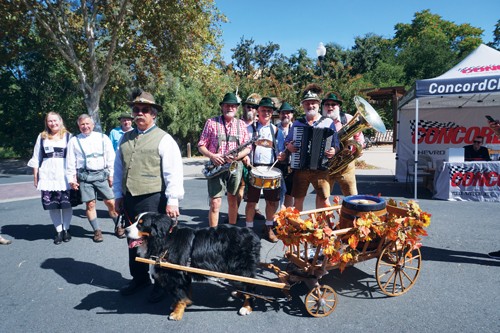 Clayton’s annual Oktoberfest officially begins when the keg and the band make their way down Main St. to the ­biergarten. From left, co-chair Marilyn Schmidt and husband Charlie, kegmeister Larry Bohlig and Pal, and the Internationals.  Bohlig and Pal are regulars at the Oktoberfest, traveling from Sebastopol for the event. (Tamara Steiner photo)

For our German speaking readers, the headline needs no translation. For the rest of us, “One, Two, Three, Drink!” was the official call to action kicking off the 14th Annual Clayton Business and Community Association Oktoberfest Sept. 30 and Oct 1.

By all accounts, this was the biggest year ever.

“I’ve never seen so many people on Main St.,” said Councilwoman Julie Pierce, a veteran volunteer at all the town’s biggest events over more than two decades.

“It was definitely the biggest Oktoberfest ever,” confirmed co-chair Maryann Lawrence.

The event opened on Friday night with the carnival, the bright lights of the Ferris wheel dominating the downtown skyline.

But the real fun began on Saturday when the main attractions – the beer keg and the band—made their way down Main St. past an eclectic array of vendors to the biergarten tent where revelers would eat, drink and polka all weekend to the music of the Internationals. Food vendors lined the food court with all the traditional German fare – wierschnitzel, sausages and pretzels the size of basketballs.

CBCA mounts two major events each year, the Oktoberfest and the Art and Wine Festival in the spring and run the Clayton Bocce League with year-around play. The two festivals and the bocce league together raise upwards of $200,000 each year for community improvement grants, scholarships and charitable donations.

Next year will be the last for the two women who have run the event since the inception. They will train and pass the stein to new talent.

The CBCA is a 501c3 organization. All donations are tax deductible. Membership is open to anyone who wants to work for “the betterment of the Clayton community.” For more information, go to www.claytoncbca.com or call (925) 285-8612.