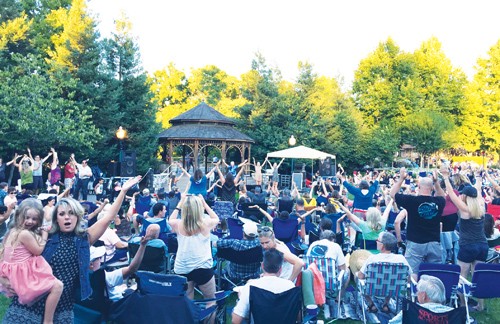 The summer concert series has become a favorite of music lovers around the Bay Area, many who follow their favorite artist from venue to venue. Pictured above, Diamond Dave Hosley, a local entertainer with a large following, leads the audience in a rambunctious “Y.M.C.A.” at the July 8 concert. (Photo by A.J. Chippero)

Blistering heat and air thick with smoke from California wildfires forced the cancellation of The Fundamentals concert last Saturday. But there’s still one more concert left in the season.
Crowd favorite East Bay Mudd will close out the 10th Annual Concerts in The Grove, Saturday, Sept. 16, 6-8:30 p.m.

It seems every year the crowds get bigger and the bands get better. At the Aug. 19 concert, high-energy dance band, Busta Groove packed the park elbow to elbow, possibly setting a record for both attendance and enthusiasm. Even those in lawn chairs got into the groove – shoulders bopping and arms swaying – as Busta Groove performed “I Will Survive.” Dancers were everywhere, including moms in sundresses swinging with their kids.

“It brings the community together; it brings the families together,” says Howard Geller, who launched the Concerts in the Grove in 2008. “You’ll see groups of 15-20 people that sit in a circle, create a living room kind of situation and just have a ball.”

Geller served eight years on the City Council and has been a long-time leader in the Clayton Business & Community Association (CBCA). He started booking bands when the city launched the Art and Wine Festival in 1995.

“As The Grove park was being completed, I went to the city and I asked if it would be a good idea if I started a concert series in the park,” Geller recalls. “This all was done to bring more people downtown to help the local businesses.”

The city pitched in $10,000 in redevelopment funds, with the CBCA adding $10,000. Republic Services and other sponsors helped fund the first 12-concert series. After feedback from neighbors, the series was pared down to 10 Saturday night shows.

“After a couple years, we lost the redevelopment money,” Geller says. “A lot of the local businesses started to sponsor us.”

Twelve banner sponsors contributed at the $500 or more level this year, and 14 patron donors gave $200 each – receiving hats, pins and a free beer at the Clayton Club during each concert. The $20 club earns concert-goers a free beer for that night.

Geller and City Councilwoman Julie Pierce also walk through the crowds with water jugs, collecting about $2,000 a concert. “All fundraising in 2017 is aimed at the 2018 concert season,” Pierce notes.

Costing about $30,000 a year, the concert series now thrives without city funding. Geller still handles band bookings, Pierce recruits sponsors and Mayor Jim Diaz and his crew set up and tear down.

“I greet the crowd and monitor any needs in the park facilities – yes, including making sure there’s enough paper in the bathrooms,” says Pierce. “We all share the responsibility of gently shooing folks home after 9 p.m.”

Sarah Rodenburg and her husband Bob attend most of the concerts, usually picking up food and wine to enjoy during the show. “It feels like a great sense of community. You see a lot of the same faces,” she says, adding: “You’ve got to get there early to get a decent seat.”

To help with crowd control, concert rules don’t allow people to set up chairs before 4 p.m. Geller estimates 2,000 people attend each concert, drawing fans from as far as Marin County and San Francisco who otherwise might not know about Clayton.

“Every time you have something downtown, it’s good. It brings more people in,” says Nicolas Maamari of La Veranda Café, one of the many downtown businesses that sponsor the concerts.

Geller gets requests from about 70 bands a year. His top picks this year have been Pride and Joy – “a super-super band that does a lot of Motown” – and Boys of Summer, an Eagles tribute band.

“The lineups get better and better. It’s just a great experience,” he says. “From what people tell me, this was one of the best things that ever happened to the city.”