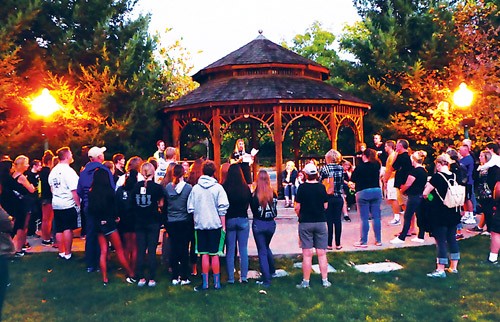 Clayton woman Amy Callahan remembers her son, Wyatt Bredell, at the first “Finding Light in the Darkness” walk to raise funds for the American Foundation for Suicide Prevention in The Grove on Oct. 21. The walk will be an annual event. (Photo by Mark Ruefenacht)


Three years ago on Sept. 11, 2014 Amy Callahan, already uneasy about flying on 9/11, boarded a plane headed for Illinois where she would attend her oldest son’s graduation from Navy boot camp.

Sadly, the day would end not with a celebration but with the tragic news from back home that her younger son, Wyatt, had inexplicably taken his own life.

What causes a 15-year-old honor student, an Eagle Scout, a youth leader in his church, to suddenly find death preferable to life?

“There are reasons we will never know,” Amy said in her opening remarks at an event in The Grove last month.  Family, friends and those surviving a loved one’s suicide brought photos to share and flashlights to light the way as they walked the mile or so through town to honor the lost and support the living.

After Wyatt’s death, Amy relied on her strong faith in God and the love and support of the community to carry on.

“Our lives changed forever that day,” Amy reflects. “But, as much as we didn’t want to, we were able to move forward into a different life with the help of family, friends and community.”

In her grief, Amy shared her story and heartache on social media and received hundreds of messages from those suffering from depression, many with thoughts of suicide.

“I had no idea how many people struggle with these thoughts and are in a constant battle.”

One young woman from Wyatt’s school came to Amy’s house late one night when she couldn’t reach her therapist.

“She had lost hope and was ready to give up.  I really had no idea how to help her but I did have an 800 number to call.” It was the hotline to the American Foundation for Suicide Prevention.

Together, they talked the teen through the crisis and helped her set up a plan going forward.

Wyatt’s suicide rocked the entire local community. Friends, teachers, and family needed to come together to grieve. Responding to the community need, Amy began to pull together a team for the AFSP’s “Out of Darkness” walk held less than five weeks after Wyatt’s death.

On the night of the walk, more than 100 supporters wearing “Walk for Wyatt” t-shirts and carrying candles, walked around Oakland’s Lake Merritt all night until dawn.

This year, Amy decided to bring the event home to Clayton. On Oct. 21, some 50 supporters gathered in The Grove for the first local “Finding Light in the Darkness” walk to honor and remember loved ones lost to suicide.

Deanna Merrigan was among them. Her son, Matt, had taken his life a year and a half ago in July 2016. He was 19. Like Wyatt, Matt’s death was sudden.

“There was nothing different that day,” she recalls. “You don’t know what the heck is going on. No explanation, no warning signs.”

As she comes to grips with her loss, Deanna is turning her thoughts to the future.

Like Amy, Deanna is searching for a way to make sense of it all. She knows Matt had been drinking and suspects that alcohol may have played a role.

“We want to move forward with a cause,” she says. “We aren’t settled on anything yet, but it will be something in the way of education.”

“My hope is that, through raising awareness and educating people, we will continue to give hope to others so that another family doesn’t have to go through the heartache and despair that our family has had to go through.”