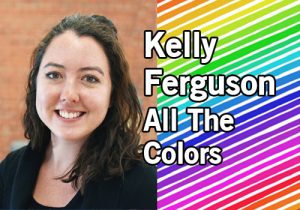 CONCORD, CA (June 22, 2022) — “I would like to see the district do more to protect the safety of kids like me and to provide a more welcoming environment for all students.”

These were the impassioned words of Quinn, a rising sophomore at Alhambra High School in Martinez, at a recent school board meeting on the issue of raising the Pride flag in town. Thanks in part to brave public comments by Quinn and others, including Rainbow Community Center’s board president Robyn Kuslits, the resolution passed.

The Martinez Unified School District raised the Progress Pride flag this year for the first time, which is a significant moved toward embracing LGBTQI+ students.

Quinn came out as queer in 4th grade, then as transgender in middle school. He/they described the importance of being visibly “out” as queer and transgender, noting that “a lot of my friends also came out.”

It wasn’t until sixth grade that Quinn heard the term “non-binary,” and it resonated.

“I thought, ‘Hey, that’s me.’ I’ve experienced gender dysphoria before while hearing my (former) name or being associated with girly or feminine things or behaviors.”

Quinn enumerated some of the most urgent issues for LGBTQI+ students, including the need for accessible gender-neutral bathrooms to safely use the restroom and change for physical education class, as well as the lack of meaningful responsiveness on the part of school faculty and administration when witnessing or hearing student reports of harassment and bullying.

In Quinn’s words, oftentimes “it is up to the victim to avoid (the bully) and stand up for themselves,” which is “not always possible.” Quinn shared that “some of my friends in younger grades were harassed to the point where they can no longer go to school.”

LGBTQI+ bullying includes peers calling fellow students by their “dead name” as a form of torment. (A dead name is the name given at birth that does not affirm the person’s correct gender identity and expression.) Another example is the insistence of separating students into groups of “girls” and “boys,” which makes participation difficult and uncomfortable for transgender and gender non-conforming youth.

Quinn has a vision for a more hospitable Martinez school district:

Quinn felt good about speaking at the board meeting.

“I hadn’t spoken about my experiences like that in front of people except for people close to me, but it was freeing to get out there and express myself. It was validating to see people listening to me, paying attention and taking my experiences into account. It made me feel that change is possible and made all my anxiety of speaking publicly worth it.”

Quinn expressed how valuable it is to have supportive and affirming adults, friends and family. He spoke about the privilege of having a mostly supportive network and gratitude that his moms foster an open and positive environment around LGBTQI+ identity.

“They always encouraged me to live according to my authentic self,” said Quinn, whose mother, social worker Sara Tucker, serves on the board at Rainbow.

Quinn is looking forward to going to San Francisco Pride, protests and other events with friends this month.

This Pride month, please join the work happening locally to support LGBTQI+ individuals and their allies. Together, we can elevate voices and experiences of queer, transgender and gender non-conforming residents like Quinn and create a more expansive and welcoming county.

To contribute to the work of Rainbow, you can make a donation toward our Pride fundraising campaign by visiting https://bit.ly/RCCpride2022 or texting pride22 to 44-321.

Kelly (she/her) is the director of development at Rainbow Community Center. As a biracial femme lesbian, Kelly has spent her career working in the nonprofit sector Please direct any questions or comments to kelly@rainbowcc.org.