CLAYTON, CA (June 23, 2022) — Preparing to participate in the Gay Pride Parade on June 25 in Clayton has given me the opportunity to reflect on several close friends who died during the height of the AIDs epidemic in the 1980s.

I have never been able to replace their humor, intellect, creativity and honesty during the last 35 years or so.

For me, things started with Bob Price, whom I met in San Francisco during the mid-1970s while working for a freight forwarding company. We would remain close friends until he died in 1990.

“Bobbie Dearest,” as he was lovingly called, introduced me to a different way of life – one without sports and dating women. Instead, art, music and culture were the glue that bound us together.

His brand of insult humor helped change my perspective on life. In addition to introducing me to the talents of Bette Midler and Donna Summer, he dressed me up like Cpl. Klinger for the last episode of “M*A*S*H.”

A city hard-hit by AIDS

Over the years, I met several other individuals through my connection with Bobbie, including:

Jeff Blouse. Best known for his work in public relations for “The Rocker” radio station KRQR, he was funny, manipulative and loyal, all at the same time. A great guy to be with at a party.

Hal the hairstylist. He cut my hair for many years, toasting the event with a glass of wine each time. Before AIDs was well-known, he was diagnosed with cancer and went home to the Netherlands to die. A year later, we learned what his real illness was.

Michael Montgomery. As a programmer in the early days of Microsoft, he was very successful – buying a home with a view in San Francisco’s Twin Peaks. Unfortunately, Michael died prior to when his promised stock options would have made him a multi-millionaire.

Ken Fitzharris. An older friend of mine from the shipping business, he was a regular lunch companion whose intellect made me look forward to our get-togethers. I took his death very hard.

Rod McCone. He was diagnosed early with AIDS but lived with the disease for more than 25 years. He had natural antibodies in his blood that fought the virus. UC San Francisco did extensive research on Rod, helping them create drugs to fight the epidemic.

Harvey Milk. This great leader died from an assassin’s bullet rather than AIDS. I had the pleasure of working on his second political campaign. He was a kind, decent man who cared about everyone. Even my then 90-year-old grandmother supported him, saying “Harvey reminds me of what I would like your Dad to be.”

An epidemic without boundaries

The list goes on, with several other friends who fell victim to the deadly plague that victimized so many gay men in San Francisco. Things happened quickly.

There was a prosperous leather bar on Folsom Street called the Ambush. The owners bought a large piece of property on the Russian River and sponsored an annual camp-out where all services were provided. The only stipulation was that attendees arrived and left on motorcycles.

The last year this event was held, more than a 100 folks from the Ambush were present. Twelve months later, more than 80% of those in attendance were dead. This is indicative of how fast AIDS swept through the gay community.

Despite what transpired, I still have fond memories of my interactions in San Francisco in the 1970s and ’80s. From umpiring the first police vs. gay softball game to a friend remarking, “The only reason you are not one of us, Rich, is that you haven’t met the right guy yet.”

I enjoyed my interactions with the LBG&T community. Oh, how I miss this era.

While the march in Clayton is no substitute for the friends lost to AIDs, it provides a nostalgic reminder of days long past. 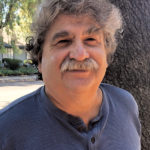 Rich Eber is a local journalist and long time resident of Concord.  His diverse topics covered go from politics to gourmet food.  He can be reached at rjerje@pacbell.net