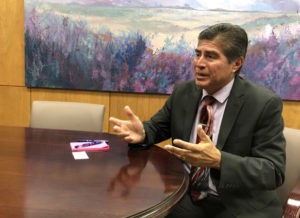 “Education saved my life,” Robert Martinez said last week in his office for the past month as the new Mt. Diablo Unified School District Superintendent.

He grew up in Southern California as the youngest child in a middle class Mexican American family home, where his parents insisted their children speak English. His life changed forever after his mother died when he was 13.

Within three years he uprooted himself from the home he shared with his overwhelmed dad to move in with an older brother, who required that to stay there the 16-year-old needed to go to school and get a job.

That experience and the resilience he needed to adapt to new surroundings and his third high school shaped his outlook on school and education, which led to his career choice and ultimately brought him to MDUSD.

He spent the past 32 years in the Fairfield-Suisun Unified School District where he worked in a variety of school and district positions.

Martinez takes over a district that has seen enrollment drop slightly below 30,000 students in PreK through 12th grade for the first time in decades. His previous district has 21,000 students at about half the number of sites operated by MDUSD.

The district’s funding primarily comes from the state calculated by average daily attendance, so those numbers present the new superintendent and his staff with major challenges, especially as they grapple to negotiate agreements with the teachers union that not only entail money issues but also class size, and other employee groups.

Just like the connections he made with teachers and school staff where he found a home away from home in high school, Martinez wants every person working in the district to think “how can I make an impact?”

“We need to look at every child and see what barriers they face in getting the most out of their school experience.” He says this applies to students who may be struggling to learn English as a second language in order to succeed in the classroom as well as those overstressed by taking all AP courses to get into college.

The “achievement gap” measured by test scores, especially in the Monument Corridor area where the majority of students are English learners, is of prime concern to Martinez. District schools use bilingual education and dual immersion at different sites. “Is there a better system?” he asks.

Martinez says with a smile that, because of his parent’s insistence on English growing up, he understands more Spanish than he speaks.

“Our goal is to have every student fully conversant in English by fifth grade. We have to make sure those families with parents who speak a different language still have the same access and opportunity for their children as the rest of our families.”

The district recently concluded a Facilities Master Plan audit that identified over $1 billion in needs.

Voters last November approved Measure J, a $150 million bond measure that the District is beginning to implement. He said the first $20 million in bonds was sold and is being earmarked for security and safety improvements.

Long-term, the district has to find ways to complete the master plan improvements in a time of dwindling enrollment and annual budget challenges.

He says he expects charter schools Clayton Valley High and Rocketship Futuro Academy to “live up to their obligations” on past due rent for district facilities they use.