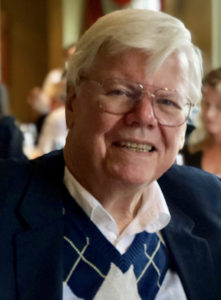 He was born in Port Townsend, Wash. He graduated from Port Townsend High School and was known as MC by many growing up.

He graduated in accounting from the University of Washington and was a member of the Alpha Tau Omega Fraternity. He played multiple instruments, including trumpet in the Husky Marching Band. It was not uncommon to have an impromptu sing-along around a piano.

After college, he got a job at Standard Oil (Chevron) and moved from Seattle to San Francisco. On a visit home, he met his love Vickums. They were married just shy of 53 years. After 32 years with Chevron, he retired in 1997.

During his Chevron tenure, he became a CPA and had the great fortune of taking his family on assignment to London and the jungle in Sumatra, Indonesia. He traveled and played golf around the world. He was an avid lover of golf, Washington Huskies, Seattle Seahawks and Seattle Mariners.

His career was mainly in the Bay Area, living in his beloved town of Clayton. During retirement, he kept busy with a new career of volunteerism. He worked as Clayton city treasurer for 20 years, Chevron Retirees Association treasurer for eight years and an AARP tax consultant doing taxes for seniors for many years.

He was a member of the Clayton Business & Community Association and loved volunteering for many Clayton events. He also enjoyed playing bocce for the Clayton Bocce Association. No worries though, he managed to schedule a round of golf in between duties.

Merle is survived by his wife Vicki, daughter Heidi Kime and her husband Brad, his grandchildren Baxter and Hadley, sister Carolyn Abolins and her husband Talis, and numerous nieces and nephews.

A special thank you to his amazing caregivers, Mark, Brian, Bhey and Rex, as well as the impressive care team with Hospice of East Bay.

A private celebration will be held later this year.

Donations can be made to City of Clayton, Merle Hufford Memorial Bench, 6000 Heritage Trail, Clayton CA 94517 or Hospice East Bay at hospiceeastbay.org.