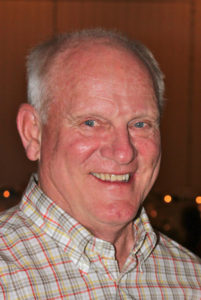 He was born in Grand Forks, N.D., to Ruth Kilgore Seven and Sosthene Seven. He moved to Eugene, Ore., at a young age. He attended St. Mary’s grade school, where he met his future wife, Shannon Starr, in the first grade. (It turned out that both Jim and Shannon were one of 10 children.)

Jim graduated from St. Francis High School and won a scholarship to Oregon State University, where he studied engineering for two years. He then transferred to the University of Oregon, where he graduated in accounting and business. He was recruited by Standard Oil (Chevron) and had a satisfying career for 34 years.

At one point, Jim was offered the opportunity to work in New Orleans and the family moved there for an enjoyable two years. When they returned to California, they settled in Clayton.

Jim was active in Sons in Retirement (SIRS) and participated in everything the organization offered. He was also treasurer of the Clayton Historical Society and a volunteer when needed for Oktoberfest and the Clayton Art & Wine Festival. He played on the local bocce team. He was a member of St. Bonaventure Church in Concord.

Sports were a big part of Jim’s life. He never missed the Giants and Warriors and would also watch the recorded games again. His life revolved around attending his grandkids’ sporting events in cross country, track, soccer and baseball. He was the one who talked most of them into running cross country and track.

Jim was proud of his own athletic accomplishments. He loved to quote from the newspaper clipping from when his high school team won the state basketball tournament. He was described as “the slim junior with lightning fast hands.”

He was a master at jigsaw puzzles and Apple products of any kind. He kept up on all the latest gadgets and continued to educate himself. He was a whiz at numbers and enjoyed investing. He traveled and loved planning the trips. 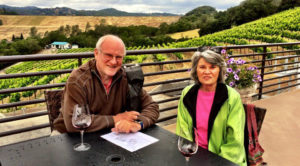 He leaves his wife Shannon and their four children, Shelley Hight (Terry), Jason Seven, Jeremy Seven and Amanda Gioia (Dave). His grandchildren are Madison and Emma Hight, Charlotte Seven, and Charlie, Tommy, Henry and Teddy Gioia. Jim is also survived by his siblings, Robert, Liz, Janet, Lois, Richard, Scott and John. He was predeceased by two sisters, Linda and Marianne.

There will be a private funeral mass for family friends in late April at St. Bonaventure’s Church in Concord.