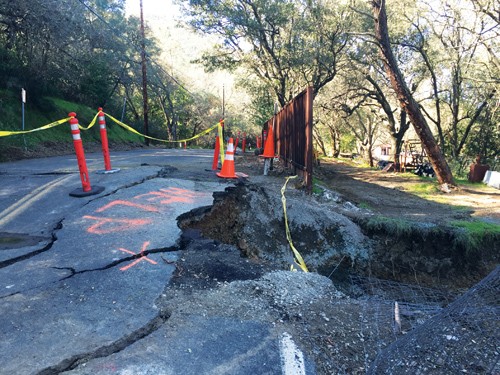 More than 256 homes were without water for a week after a major landslide snapped a water main and collapsed a section of Morgan Territory Rd. on Feb. 24, closing the main access to the area indefinitely. With the road closed, the only vehicle access is a 15-mile, detour over a one-lane mountain road, also severely storm damaged, to Livermore. (photo by Tamara Steiner)

For five years, California has been wishing for rain.

Be careful what you wish for. You may get it.

And we got it. And then we got more. And more.

So much rain that flooding and mudslides have dominated the Bay Area headlines for weeks. San Jose, Big Sur, Sonoma. And now, Morgan Territory.

With each big storm, mud and rockslides created an obstacle course on Marsh Creek and Morgan Territory Roads, often closing the road to through traffic. Locals maneuvered the mud-caked pavements and silently prayed for the rain to stop.

Then things got really serious. On Tuesday, Feb. 22, county workers noticed that an entire hill on Morgan Territory Road, about a mile in from Marsh Creek, was moving against the road, buckling and cracking the pavement. Over the next two days, the slide broke the water main twice. It moved fast, and by Thursday, the damaged road was impassable and the water main broken again.

At noon on Feb. 24, county authorities closed the road —- indefinitely. In a blink, residents found themselves stranded without water on one side or the other of a massive landslide, stretching 400 feet along Morgan Territory and another 400 feet upslope.  On the opposite side of the road, they stared at a huge, gaping hole. At the bottom, a broken blue water main lay spewing water into the mud.  Redwood boards littered the hole, evidence of the expensive fence that had once stood above it. A power pole about midway in the slide was leaning dangerously over the road at a 30 degree angle.

With the closure, the only vehicle access to the 256 homes on the south side of the slide is over a one-lane, storm-ravaged mountain road—15 miles to Livermore.

County officials are scouting the area in search of a viable alternative to the long detour. The process is slow, says County Public Works Director, Julie Bowen. What few trails and fire roads there are all cross private property. “We’re dealing with 30 land owners,” she said at a community meeting last Thursday.

The news was bad. “There is no quick fix,” Bowen said. “It’s going to be months.” A request to the Board of Supervisors to declare the area a state of emergency estimates road repairs to begin around May 15.

East County Fire and CalFire have stationed an engine and ambulance on the south side of the slide, according to East County chief  Hugh Henderson. In a medical emergency. a helicopter will be dispatched automatically. There are five landing sites in the slide zone. This is small comfort to Megan Traum, who is in her 22nd week of a high risk pregnancy. “I’m not sure how many more months I can continue to walk back and forth three times a day. I want to be sure I have a way to get to the hospital.”

Many of the families in the areas have young children, creating massive transport issues. Several families have opted to do independent study, keeping kids at home. “Home study it is until we have a safe route to Marsh Creek,” said Sarah W. who has three children.

A Mt. Diablo School District representative at the meeting will look into providing a school bus to the north side of the slide.

Some residents have stationed a vehicle on each side of the slide, driving to the barricade and walking across the closure. Residents are worried that this option will close off once construction begins in May.

Others have opted to move for the duration.

“I am leaving tomorrow,” posted Curry Creek resident Julie E. on the neighborhood Facebook page.” I cannot do another week of driving that nail-biter road.”

The neighborhood was without water for a week until CCWD could install 1400 feet of flexible pipe above ground. Water service was restored while residents were attending the community meeting.

During the week without water, CCWD provided bottled water for drinking.

As residents approach the end of their second week of the “new normal,” emotions run high. Many are frustrated with the slow pace of finding alternate access. Heavy rains again last weekend added to the danger of more sliding.

But despite the tense situation, neighbors are pulling together. “This has not been an easy couple of weeks for all of us,” says Tracy Hillery. “But everyone seems to be pulling together, picking up water for us, offering rides and greeting each other with smiles and asking if we need anything. “We are so proud of our Clayton community.

For slide updates, go to http://www.co.contra-costa.ca.us/227/Public-Works.