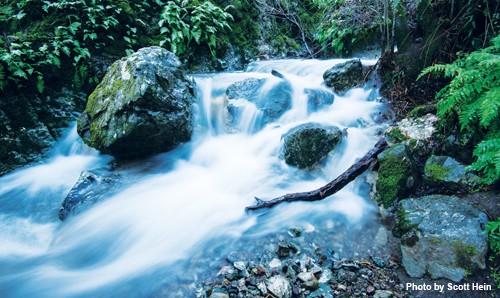 With this winter’s heavy rains, creeks in the valley and on the mountain are bursting their banks. Hikers by the hundreds are heading up Mt. Diablo between storms, eager to brave the mud for views of the rare rushing waterfalls. (See more Scott Hein photos at photos.heinphoto.com.)

You can hear the whispers all around the Bay Area. People know they shouldn’t say it, but they can’t hold it in any longer.

It’s just that … (shhh) we’re all really sick of the rain.

Of course, anyone who dares speak their mind is quickly filled with remorse and adds, emphatically: “But we really needed the rain.”

Because California’s Mediterranean-style climate includes a persistently dry late spring to early fall, we look at precipitation totals on a water-year basis – not a calendar year. We’re currently in the middle of the 2016-’17 water year.

Northern California enjoyed a healthy start to this water year in the final months of 2016. During the first few weeks of January, our area also was the beneficiary of a nearly continuous series of storms.

Several of the storms were of the moisture-laden Pineapple Express variety. Winter sports lovers were treated to some cold snow weather fronts delivered by the polar jet stream.

At Concord Airport, 8½ inches of rain was recorded in January – more than five inches above normal for the month. Rain fell on 15 of the first 23 days of the month, another indication of the nearly perpetual precipitation.

In the Northern Sierra, using an eight-station index, precipitation was 260 percent of normal for the month of January alone. For the water year, this index hit 194 percent of normal. Northern California and its mountain watersheds benefitted greatly from the rain and snow.

The California Department of Water Resources performs monthly snow core surveys at more than 100 sites in the Sierra. Hydrographers then calculate a value called snow water equivalence (SWE), which is the amount of water that would result if all the snow melted simultaneously.

To get a sense of how this compares to drought years, just two years ago the February SWE was only 23 percent of normal. The prior water year, it was as low as 14 percent.

All this bodes well for California’s water supply. Lake levels have risen dramatically over the last month, and major reservoir levels are at about 125 percent of normal capacity. Oroville, Shasta and Folsom lakes have been making flood control releases for the first time in several years.

Locally, the Los Vaqueros Reservoir near Brentwood is holding more water than it ever has. Last week, the reservoir’s storage level rose above 133,000 acre-feet, surpassing the high reached in 2013.

So does this mean the California drought is over? The Pacific Institute recently reported that the U.S. Drought Monitor for the northern half of the state has been downgraded from a severe drought classification to either slight drought or drought free.

All this good water news is welcome, but there are caveats. Some effects of the recent drought, like ground subsidence and tree loss, cannot be corrected. Also, it will take years for ground water supplies to return to normal.

And, there is always the threat that another long drought cycle is not too far down the road.

Still, Northern Californians can breathe a large sigh of relief thanks to the extraordinary rain and snow events of January. We may grow weary of the wet weather, but we really needed the rain.

Woody Whitlatch is a meteorologist retired from PG&E. Email your questions or comments to clayton_909@yahoo.com