Les Ruefenacht didn’t let the coronavirus dampen his creative woodworking juices. The Clayton resident just shifted gears and started building something else that could help someone.

His new venture is all about crafting efficient desks for local school children who are learning remotely as the pandemic persists with no end in sight.

His endeavor couldn’t have come at a better time for Mt. Diablo Unified School District parents – the target audience – who have quickly flooded him with requests.

“I had no idea if people would be interested in this,” Ruefenacht said.

It started with a nudge from his wife Sandra, who saw a story on the ABC national news about a Maryland man and encouraged him to investigate it.

“You can build anything. You need to do that,” she said.

Within 48 hours of launching this one-man show, Ruefenacht had fashioned a prototype, had 10 desks in various stages of completion and had received more than 100 inquiries for the free desks as word went out on social media.

Before this, the 80-year-old had been using his spare time creating hundreds of small wooden “Buddy Dog” toys. These were destined for children with cancer and chronic illnesses receiving care at California hospitals and Ronald McDonald Houses. However, COVID-19 put that project on hold.

Instead, Ruefenacht will continue to make the little dogs in honor of first responders. Each dog will have the name of a first responder in place of “Buddy” painted on the side.

The care he puts into his projects mirrors their belief in metrology, which is the science of measurement. He is a metrologist, and his life-long work with Heusser Neweigh involved the manufacture and calibration of precision scientific instruments such as thermometers, pipettes, balances and gage blocks.

They found plans for the desks on DesksbyDads.com, another group active in this growing nationwide project. Determining that the design was too big for the corner of a kid’s bedroom, he tweaked the dimensions. 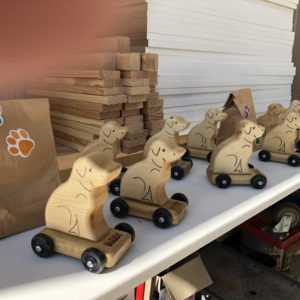 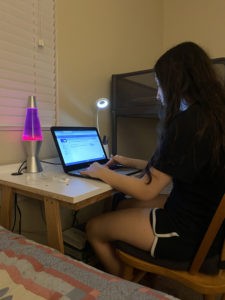 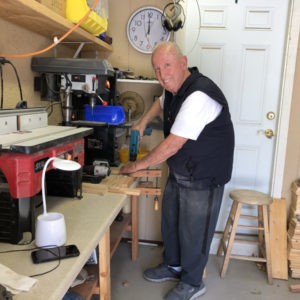 His desks are 20 inches deep, 32 inches long and 28 inches high. Each is equipped with a six-socket power strip, two USB ports, an overhead three-setting LED lamp and a grommet through which to orderly feed the electrical cords below the desks.

He anticipates finishing 20 desks by the first weekend of November, then he’ll be off to Lowe’s for more lumber.
He acknowledges how vital and instrumental Sandra, also 80, is to the ultimate success of this project.

“She is answering all the emails for me on the computer. That is a big help,” he said. “I couldn’t do that and make the desks.
“We have always been alongside each other. She has been working with me since we got married 60 years ago,” he added proudly.

Ruefenacht’s setup comes in at $65 per desk, compared to $45 for those by DesksbyDads.

“I have to be efficient to get the max out of my lumber,” he said, adding: “Lowe’s gave me a nice discount.”

Recognizing immediately that this endeavor was not going to be cheap, son Mark acquired the domain name Desks for Kids by Grandpa’s Kindness Workshop. Then he posted photos on a Go Fund Me Campaign he set up.

“Thank goodness he did that. If I am going to make these desks, I am going to need the financial help,” said Ruefenacht, who noted that parents have been willing to pay for them and such donations are most welcome.

“If you start feeling sorry for yourself, just look around and see how you can help someone,” Ruefenacht said, quoting advice his dad gave him.

Twenty-six desk requests have come from parents of children attending Rio Vista Elementary School in Concord, which serves an at-risk population of learners.

“I go on home visits and see my students studying on couches and floors,” said Principal Janis Heden. If giving her students proper desks weren’t enough of a godsend, her voice rose higher when she noted: “A lamp!” Heden is promoting the project within her school community and sharing the opportunity with fellow administrators.

Fabiana Swingler of Concord, who learned of Ruefenacht’s project through social media, couldn’t say enough about the couple’s generosity to provide her daughter Yasmin with a high-quality desk that’s a perfect fit for her small bedroom.

“He is using his time, talents and money to help others,” said Swingler. “They are great people.” She described how her 16-year-old daughter, an junior at Clayton Valley Charter High School, had developed back problems because she was doing her work sitting on her bed.

“They are angels,” she said of the Ruefenachts. “They are just incredibly kind people for doing this.”