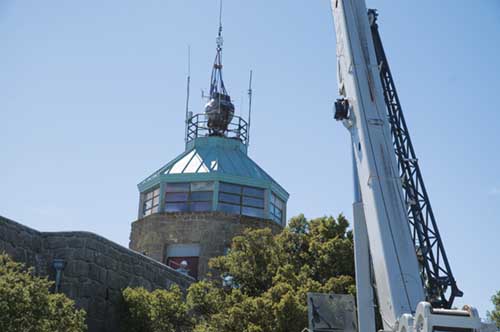 All eyes were on the “Eye of Diablo” as a crane lifted the 1,500 pound, eight-foot-tall beacon, swung it in a gentle arc and carefully placed it on a custom-made platform attached to a truck and trailer. A small, private crowd of park rangers, Save Mount Diablo members, Pearl Harbor survivors and their wives, engineers and media quietly watched the operation.

The beacon was heading down from its perch atop Mount Diablo in SMD’s efforts to make improvements to it before Pearl Harbor Day 2013, Dec. 7.

The beacon was secured in place before making its slow decent down Mount Diablo to a warehouse in Concord for its rehabilitation. The road was closed to guarantee safety for this giant dignitary.

Before radar, the beacon shone regularly as a safety device for night flying and later graced the night sky once a year on Dec. 7 as a tribute to those who died in the Pearl Harbor attack.

The lift-off began the hands-on phase of Save Mount Diablo’s project to rehabilitate the beacon in time to light the night this Dec. 7.

“Save Mount Diablo has co-sponsored the Beacon Lighting Ceremony for years,” says SMD’s executive director Ron Brown, . “The beacon shines for those who fought for our freedoms at Pearl Harbor, allowing us the freedom to fight to protect the wilderness in our backyard. We’re proud to be a part of restoring the historic beacon so the tradition can be continued for our Pearl Harbor survivors and our community.”

Redwood Painting Company, owned by Clayton residents and brothers Charles and George Del Monte, were asked to do the painting and volunteered their services in support of the mountain in their backyard.

The beacon is being stripped of paint using proper lead abatement procedures. After primer is applied, other repair work follows. Then the beacon is painted with four coats of durable, commercial grade paint in Cape Verde green. All work will be done by hand. “Be gentle,” is the direction Del Monte gave his staff.

Other work includes repairing or replacing a cracked lens, bearings that could not be reached until the beacon was removed, and wiring. A temporary blinking red light is filling in for the original while it gets restored.

The 1,000-watt incandescent bulb will likely be replaced with a 1,000-watt halogen bulb for slightly brighter output and longer lamp life. The beacon was visible up to 100 miles away and rotated six times per minute. Candle power and visibility are about half of each now.

Work is due to be complete in time to replace the beacon by October, when the lift-off will happen in reverse.

The rehab doesn’t come cheap. SMD raised $100,000 for the projects, thanks in part to a matching grant from the Dean and Margaret Lesher Foundation, said SMD’s communications manager Beryl Anderson. The foundation offered to match all donations to the Beacon Restoration Fund up to $50,000. Any overage goes to a maintenance fund for the beacon.

According to Anderson, the final $10,000 needed to fund the project was received from Chevron, who had initially installed the aviation beacon as Standard Oil.

Linda Padon, general manager of public policy and corporate responsibility for Chevron, says, “We built this beacon on the mountain in 1928 in support of the then-burgeoning aviation industry and are pleased to provide the final contribution needed for its restoration.”

Brown asked volunteer Dick Heron to take charge of the rehab project, and he, along with volunteers John Gallagher and John Stuart, lead the project.

“A lot of people have stepped forward, not only with monetary donations, but donations in kind,” Heron says. In addition to the painting, other donations included two backup red obstruction lights, the welding of the platform, and the crane and rigging crew.

The beacon first shone in 1928 from its perch atop a Standard Oil Company tower bearing the letters S and D (for Standard Diablo) in large neon lights that blinked S and D in Morse code. Standard Oil financed the beacon, one of five, to provide the Pacific Coast with the same protection for night flying as the Midwest, in the days before radar. The beacon operated on the tower until being moved to the Summit Building in 1939. It went dark on Dec. 8, 1941, as part of a blackout after the attack on Pearl Harbor and remained so until relit on Dec. 7, 1964 as a memorial at the request of the Oakland Chapter of the Pearl Harbor Survivors Association. It has illuminated the night each Dec. 7 since.

Now, the Sons and Daughters of Pearl Harbor Survivors sponsor the annual event with Save Mount Diablo.

Retired park ranger Burt Bogardus kept the beacon operational, but over the years, lack of proper maintenance along with the elements, peeled the paint, cracked the lens and caused other damage. The beacon even had to be pushed manually for 45 minutes one year before it could run on its own.

Because the beacon is owned by the state, it took special legislation to allow SMD to manage this steel labor of love. Gallagher and Heron wrote parts of the bill passed with the support of Assemblymember Joan Buchanan.

Chuck Kohler, a Pearl Harbor survivor, says, “When the new beacon is lit, it will send out a message that you do remember – you do. It will honor us after we’re gone. You will have kept a promise to us as we kept our promise to you.”

To donate or for more information about the beacon restoration, go to www.savemountdiablo.org and click on Beacon Restoration.