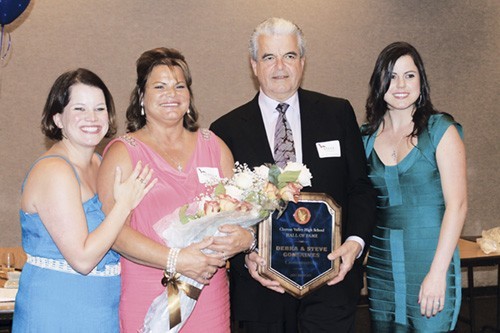 The Clayton Valley High School Athletic Hall of Fame inducted its third class last Saturday evening at a packed Centre Concord. Athletes, teams and coaches dating from the 1960s to the end of the millennium were lauded for their accomplishments on the field, court, track and pool. Yet none of the newly-enshrined Hall of Famers has had a greater impact on the school over the past four decades than Debra and Steve Gonsalves, who are this year’s Community/ Leadership honorees.

Steve Gonsalves still has his name on the Dan Della Gym wall for the school record of 677 career rebounds while playing for legendary basketball coach Bruce Iversen from 1968 to 1971. It was during his high school days that the all-league basketball star, who also played on the football and golf teams, met and fell in love with cheerleader Debra Culum.

Four years after she graduated from Clayton Valley, Debra married Steve in 1976. They never ventured far from their hometown and alma mater. Steve Gonsalves followed his dad Matt into the family business, Conco Companies, where is now president. (Matt Gonsalves was inducted into the California Homebuilding Foundation Hall of Fame in 2000.)

Gonsalves Stadium at CVCHS bears the family name. Not only is just about everything in it attributed to their generous donations, including the press box, lights and track, but Steve Gonsalves did not just hand over a check, he dug in and joined the committee to drive the stadium project, which included artificial turf and lights, to completion.

CVCHS isn’t the only school to receive benefit from the couple’s generosity, whether the need be big or small. Mt Diablo and Highlands elementary schools, Tabernacle Christian, Diablo View and Pine Hollow middle schools and De La Salle, Carondelet and Pittsburg highs, to name a few, also are grateful for their assistance.

A few years ago when the Mt. Diablo Unified School District announced it was eliminating high school sports, Steve Gonsalves was the first person to step up to make a substantial donation of $100,000 in Coach Iversen’s name. Then he began calling others to do the same. The United Mt. Diablo Athletic Foundation sprang up among the six schools in the district to manage the effort. The Gonsalves were at Newhall Park running in the first 5K run in 2009 to raise money and awareness of the dire situation impacting student-athletes in the district.

Debra Gonsalves’ interest in helping also reaches far and wide, but it is clear her focus is still at CVCHS, where she has left her mark in the classroom as well as on the campus. She is well known as the “Queen of Campus Beautification” at the school, often seen planting flowers, cleaning gutters and mowing fields. For Debra it is a labor of love. She has worked in classrooms, counseling troubled girls and encouraging special education students to set goals for the future. She helped spearhead the “Do the Right Thing” program at CVCHS, worked closely with the Parent Faculty Club and Athletic Boosters and always helps with the “Every 15 Minutes” program.

The Gonsalves family has seen another generation enjoy CVCHS as their daughters Kelli (Class of 2001) and Jennifer (2004) are Eagle alums.