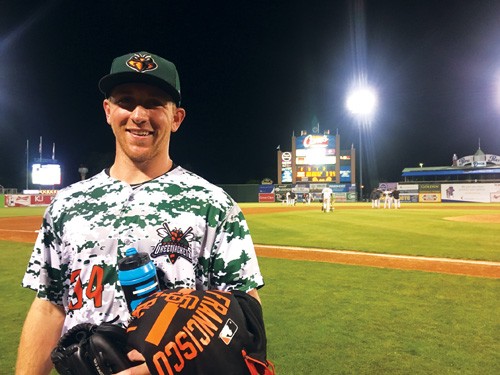 After gaining national headlines while a junior at Clayton Valley High School, Domenic Mazza is back in the national spotlight this spring for his performances in the San Francisco Giants organization.

First, Mazza was the punchline in a story about former NFL quarterback Tim Tebow hitting his first homerun as a pro baseball player. The HR came off a pitch from Mazza in the first game of the season for Mazza’s Augusta GreenJackets minor league team.

Then in late April, Mazza became the first pitcher in the history of the Class A South Athletic League to throw a perfect game as he retired 27 consecutive Lexington Legends batters.

Mazza needed just 85 pitches to complete his nine innings, which included a bench-clearing brawl in the eighth inning when three players were ejected. Overall, he struck out nine in the 9-0 victory and had his right fielder, Sandro Fabian, to thank for excellent plays on fly balls in the eighth and ninth innings that threatened to break up the no-no.

To give some perspective to Mazza’s achievement: In the 140 years of Major League Baseball, there have been more  than 210,000 games played and just 23 perfect games. That’s one perfecto for every 9,100 games. Mazza’s gem is the 181st perfect game in the minor leagues since 1887, an average of 1½ per year across all the minor leagues.

His parents subscribe to the MiLB app so they can watch their son’s games at home in Concord. Steve and Lorrie Mazza hook up their iPad to the family TV. “It’s unbelievable,” the proud dad said after the perfect game.

The 22-year-old Mazza, who split time on CVHS golf and baseball teams, has a powerful golf swing that has delivered drives of up to 436 yards in competition. On the mound, however, the lefthander uses a fastball that tops out at 88 mph mixed with a slider, changeup and curveball to get batters out.

When Mazza was interviewed in the days following the perfect game on the Giants flagship station, KNBR, he told morning show host Brian Murphy that he was on a field trip with his Clayton Valley Public Service Academy in the AT&T Park bleachers in June 2012 when Matt Cain threw a perfect game for the Giants.

“I’ve been a Giants fan all the way,” he told the morning show. He said the day he was drafted by his favorite team was amazing. “The best day of my life.”

He was the GreenJackets opening day starter and gained national notoriety when former Heisman Trophy winner Tebow took him deep in his first minor league at bat. That landed Mazza with an interview on the Dan Patrick Show, where he told the media star he’d remember that the next time he faces Tebow.

In his first start after the perfect game, Mazza retired the first nine Kannapolis (NC) Intimidator batters before giving up a hit. He eventually was the losing pitcher, allowing nine runs on 11 hits over 6-1/3  innings.

The 2015 draft pick by the Giants out of UC Santa Barbara is in his second season with the GreenJackets. Last season, he was 8-3 with a 3.93 ERA and recorded 79 strikeouts in 14 starts. The CVHS 2012 grad was selected in the 22nd round of the Major League Baseball draft after his junior season at UCSB.

Mazza made headlines while at CVHS when he finished second as a 16-year-old in the Re/Max World Long Drive Golf Championship in Nevada in 2011. He turned down the $70,000 second-place prize money to retain his amateur status and eligibility to pitch for his high school and then college teams.