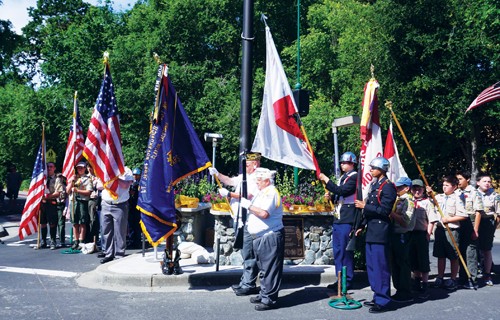 After years of isolation, Vietnam vet finds comfort through VFW.

A young man, ecstatic to be home after a year and a half away, walked off the plane and into the San Francisco airport in 1969.

Fresh from his service in the war, he was smartly dressed in his Army uniform. The familiar buildings of the San Francisco skyline framed by the wide airport windows were a welcoming sight.

But the view was the only welcome he received. Everywhere he looked, his gaze met hostile eyes. As he began to make his way out of the crowded building, something splattered at his feet. Someone had spit at him.

Scott DeVenney, a Clayton resident now active in the Veterans of Foreign Wars (VFW) and was Master of Ceremonies for last week’s Memorial Day Celebration. He was only 19 when he was drafted into the Vietnam War. He was in the midst of studying theater arts at Cabrillo Community College, with big dreams of becoming an actor, on the day his father walked down the stairs and, ashen-faced, handed DeVenney his draft notice.

Upon hearing he had been drafted, many of DeVenney’s friends urged him not to go. “I didn’t quite feel right about that,” he recalls. “I really felt that if your country says ‘We kinda need you,’ then there’s an obligation to show up and make an effort. So I showed up and made an effort.”

A tour as a medic

DeVenney received his basic training at Fort Bliss, Texas, a desert location he describes as “the most misnamed place on Earth” because of its freezing winters and miserably hot summers. The Army assigned the young DeVenney to be a medic.

During a tour in Vietnam, he served in the Army’s 4th Infantry division. For most of his time there, he worked as a platoon medic, administering medical treatment to soldiers in combat. He also worked on a MEDCAP team, providing medical assistance to civilians in nearby villages.

Returning home at the end of his service, DeVenney felt the animosity of his fellow Americans first-hand. “I think the Vietnam era soldier had a tougher time ‘repatriating,’ as it were,” explains DeVenney. “World War II soldiers and sailors and service men and women were welcomed home with tickertape parades and the thanks of a grateful nation and all of that. … I literally was spit at.”

Soon DeVenney decided to hide his veteran status from the rest of the world to avoid facing indifference and animosity Vietnam veterans had come to expect from their countrymen. “We were not heroes,” DeVenney says, “and we were the first generation to have lost a war, and so everybody wanted to just get us out of sight.”

At first, DeVenney was aimless, finding it hard to readjust to civilian life. But his college counselor encouraged him to once again pick up his dream of becoming an actor, and for 25 years his acting career was successful. He was never out of work, acting in industrial videos during the day and performing in the theater at night.

DeVenney had parts in movies and television, including the fourth “Star Trek” movie and TV’s “Evening Magazine,” as well as dozens of commercials for companies such as McDonald’s, General Electric and Activision.

DeVenney did not join the VFW until many years after the war. Because of the negative perception of Vietnam veterans, DeVenney was at first refused membership. But years later, at the constant encouragement of friends, he finally felt ready to try again.

“One day I said, ‘It’s time to embrace this part of my life that I’ve never been able to really embrace before,’” DeVenney explains.

He slowly became more involved with the VFW and today is a service officer and trustee for VFW Post 1525. The VFW is the largest veteran service organization in the country, and is dedicated to supporting veterans through a multitude of services from donations and lobbying for laws to promoting patriotism in the community.

DeVenney co-runs the post’s youth program and helps veterans in need by facilitating paper work and finding housing or monetary assistance. He has also begun taking a more active role in VFW events by helping to organize them and acting as emcee, as he did this past Memorial Day in Clayton.

DeVenney feels that joining the VFW has been a very rewarding experience. “It was the first time I felt welcomed home.”

DeVenney has lived in Clayton for 33 years with Linda, his wife of 45 years. They have a son, Lance, who is the production manager for Fifty Licks Ice Cream in Portland, Ore. DeVenney is a beloved substitute teacher at El Monte Elementary in Concord, a Boy Scout leader and a bass vocalist in the Devil Mountain Chorus.

For more about the VFW, visit vfw.org.

Carina Romano is serving a summer internship with the ­Pioneer. She attends Dominican College in San Rafael, is a Clayton resident and plans on a career in publishing.