CONCORD, CA (July 15, 2022) — In some ways, nothing is any different than it has been for several decades as the 2022 high school football season nears with De La Salle ranked as the No. 1 team in Northern California and in America’s Top 40.

On the other hand, so much changed last year when the Spartans lost three games and failed to reach the state championship game for the first time since the bowl series began in 2006. In the process, the Concord powerhouse saw two of its most significant and historic steaks ended.

Last Sept. 10, the prep football world had a major shock when Saint Francis of Mountain View scored late in the game to defeat DLS 31-28 ending a record most likely never to be approached. The Spartans had not lost a game to a team north of Clovis since the 1991 North Coast Section championship game to Pittsburg when Saint Francis defeated them ending a 30-year streak of 318 unbeaten games.

After being snubbed by CIF for the automatic State Open Division Bowl berth, De La Salle hosted Folsom in the Northern California Division I-AA Regional Bowl in Concord last December. DLS failed on a two-point conversion in the last two minutes and fell 28-27 in a rematch with the Sacramento area powerhouse after the Spartans had won the regular season matchup 31-10 at Folsom.

The Folsom Bulldogs then lost 33-21 in the State Bowl game to Cathedral Catholic.

The Spartans non-league schedule this year has them traveling to defending state champion Cathedral Catholic while they will have the opportunity to avenge last fall’s defeats when Saint Francis and Folsom each come to Owen Owens Field in September.

In the pre-season MaxPreps National poll, De La Salle is ranked No. 38, which is the fifth highest among California schools with St. John Bosco and Mater Dei 1 and 2 in the USA. Third nationally is St. Frances Academy of Baltimore who inflicted the third defeat on DLS in 2021.

The highest of highs for De La Salle football have often coincided with high calibre play at quarterback to marshal all the elements of the run-oriented offense. Coach Justin Alumbaugh has two athletic yet inexperienced players competing to be the No. 1 signal-caller this fall. Whoever wins the position will have two elite senior offensive weapons to lean on in running back Charles Greer and 6-5 tight end Connor Flannigan, who has verbally committed to Notre Dame.

Junior Carson Su’esu’e was the varsity backup last year and would seem to have the edge going into pre-season practice starting Aug. 8, just 18 days before the first game. Sophomore Toa Faavae played on junior varsity last season before being called up for the playoffs. Whichever player is not tabbed for the starting role will see plenty of action at another skill position as Alumbaugh highly rates their athletic abilities.

One change in DAL divisions

The Diablo Athletic League made one change from last year’s Foothill and Valley football divisions with Northgate moving up to Foothill and Alhambra of Martinez replacing the Broncos in the Valley.

Rae Jackson Sr. is the new coach at Ygnacio Valley, which will be playing its first season as the Wolves.

Besides De La Salle and Clayton Valley Charter, three other local schools qualified for the 2021 NCS playoffs. Unfortunately for Northgate (Division III) and Mt. Diablo (D-IV), both got an eighth seed which pitted them against the No. 1 seed in their division. Each lost their first-round game to the eventual section championship team. Berean Christian (D-VII) also made the playoffs before the Eagles lost a two-point opening-round game. 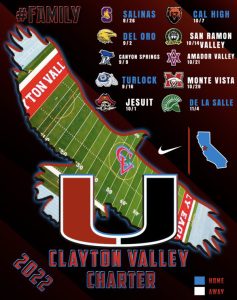