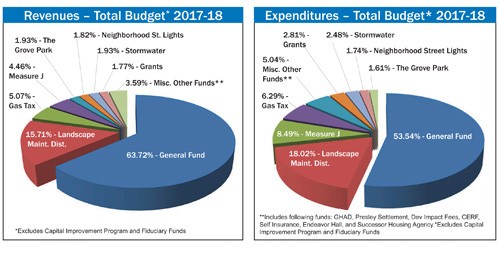 Projected 2017-18 revenues will exceed expenditures by nearly $11K. Additionally, an anticipated expense in the ­Successor Agency last year failed to materialize, which gives the city $250,000 for a new Pension Stabilization Fund to help offset market fluctuations in the coming year.

At its June 20 meeting, the City Council passed a balanced budget for FY 2017-18 with room to spare.

The current fiscal year will close with a reserve balance in the General Fund of $5,493,492 – 123 percent of next year’s expenses.

“If we had to, we could actually operate for a full year on reserves alone,” said Finance Manager Kevin Mizuno in his budget report. “We would never have to do that, but for a city our size, this is very healthy.”

Nothing gives financial managers heartburn more than uncertainty. Over the past two years, the city has had to deal with large spikes in employer pension contributions, which have caused large fluctuations in its unfunded liability. The city was able to cover last year’s spike. Due to uncontrollable market swings and actuarial changes the city expects another large spike in 2018.

As a hedge against future fluctuations, the city established a Pension Contribution Stabilization Fund and will contribute $110,000 for fiscal year 2017-18 to help offset the spike. The funds result from an anticipated revenue gap that failed to materialize last year in the Successor Agency to the Redevelopment Agency.

Street rehabilitation and paving projects make up 70 percent of the $2,471,256 Capital Improvement Budget. The remaining budget is split between $503,000 for sanitation and sewer improvements on El Molino Drive and two city parks.

North Valley Park will see playground improvements and new equipment for $165,800. The final $50,000 is allocated to Clayton Community Park for rehabilitation of the lower field.

Carina Romano contributed to this story.