Hall Sports Ventures has stated that they are relinquishing their exclusive negotiating rights with the City of Concord to develop 33.5 acres between the Concord BART Station and police headquarters on Galindo St. where they originally proposed building an 17,000-seat soccer stadium, hotels, convention center, housing and retail.

Joe Garaventa, long-time Concord businessman who is president of Hall Sports Ventures, says, that in the wake of the coronavirus pandemic “the future is rather difficult to forecast for all types of real estate projects. The added factor of social distancing and how that will impact venues like soccer stadiums makes this project very problematic.”

He added, “With so many unknowns as to how and when people are going to feel comfortable sitting next to strangers at stadiums and concerts, we’re taking a ‘wait and see’ stance on these projects.” Garaventa added that the firm still “loves the 680 Corridor” and will look for new projects locally when they are economically feasible.

The City has not received official notification of the withdrawal but Mayor Tim McGallian told The Pioneer, “While it’s unfortunate that Hall Ventures has discontinued its feasibility study of this development effort, we remain committed to exploring future opportunities to develop our city in a thoughtful way that brings new jobs, housing and retail space to Concord.”

The Concord City Council in March 2019 entered into an 18-month Initial Exclusive Negotiating Agreement (IENA) with Hall Sports Ventures to develop the site adjacent to the BART station on parcels owned by the city and BART. The Hall proposal included a mixed-use, soccer-specific stadium, hotels, a convention center, multi-family housing and retail/office/commercial development.

Although not in the original proposal, there were discussions about the stadium also hosting concerts.

The stadium was to serve as home of a United Soccer League franchise. There are currently 35 clubs in USL Championship League, the tier of men’s professional soccer in Canada and the United States directly below Major League Soccer. Hall acquired the rights to a USL Championship East Bay franchise in 2017 and first sought to locate it in Oakland before approaching Concord in 2018.

After doing community outreach and holding discussions with city staff, Hall Sports Ventures explored a smaller modular stadium in the 5,000—6,000 seat range. Garaventa reports they also looked at “a couple alternative sites in downtown Concord” for the stadium.

Concord Councilman Edi Birsan first broke the news about the project effort stopping on his Facebook page. He was mayor in 2018 when the project was first proposed and today told The Pioneer, “What was always called the Stadium Project evolved into a housing and downtown development project with a very small stadium (5,000), a possible business building, below market housing for 1000+ rooms and a hotel.

“I am disappointed that the community and the Council did not get to look at the totality of a final design, which may have been worthy of support. We will not know now. All projects go through many changes and to fixate on the first presentation is to deny the possibilities for improvement.”

A self-styled grassroots group, Concord Communities Alliance, was formed in opposition to the project and lobbied attendees at a number of Thursday Music and Market concerts last summer in Todos Santos Plaza. Their informal polling there showed strong opposition to the project. A promotional handout from CCA said “public outcry is essential to ensuring” city councilmembers do not approve the final project.

The group issued a press release today that in part says, “The withdrawal of the proposal by a Walnut Creek developer to build a stadium in downtown is a win for Concord residents. This is the conclusion of the Concord Communities Alliance, which determined in informal polls last summer that an overwhelming majority of residents were opposed to the proposal.”

One of the founding members of CCA, Laura Nakamura, adds, “We are looking forward to moving forward as a community and focusing on making Concord a better place for all who call Concord home.

She goes on to tell The Pioneer, “Our website is a bit-single issue at the moment, but we were also very involved in the district elections and are now finding ourselves involved in issues that focus on our homeless residents/Covid-19 now. We’ve done some podcasts and Facebook Live events and are trying to do what we can on a shoestring budget. Our new website will be up and running soon.”

As part of the IENA signed last year Hall Sports Ventures paid for all city staff time and would have also paid for a feasibility study had they felt ready to proceed. The IENA was due to expire this September but city staff were ready to offer an extension to allow them to complete the study.

The withdrawal by Hall is the latest blow to development in Contra Costa County’s largest city. Since last April four major projects have stalled or been abandoned.

The proposed AvalonBay mixed use project, just one block from the stadium site, fell apart after the council required union labor, the same fate that befell the master developer agreement with Lennar Concord LLC this March for the massive Concord Naval Weapons Station conversion.

Earlier this year the city and the U.S. Coast Guard were unable to come to terms on the purchase of 58 acres on East Olivera Rd. where local homebuilder DeNova Homes was to develop a mixed-income residential project. 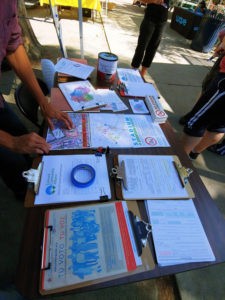 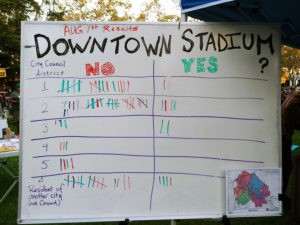 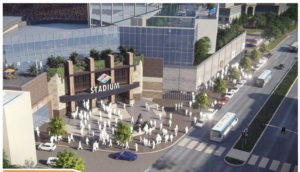 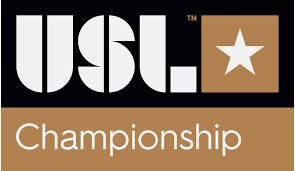