The fire destroyed eight units and displaced 40 residents in the 1700-block of Hargrove Street. Investigators determined that fireworks ignited behind the apartments caused the blaze.

Investigators arrested James Sossaman, 44, an Antioch resident, for Unlawfully Causing a Fire to Inhabited Structures (PC § 452(b)). They also charged him with being a Felon in Possession of a Firearm (PC § 29800). Antioch Police transported Sossaman to Martinez Detention Facility for booking.

Con Fire responded to multiple reports of a vegetation fire behind apartments in the 1700 block of Hargrove in Antioch, May 31 just after 5:30 p.m. While responding, Engine 81 reported a large column of black smoke from a half mile away. Upon arrival, the grass fire had already extended from the grass into a two-story apartment complex and they order a second-alarm response. An aggressive fire attack followed in an attempt to slow the spread of fire.

Witness interviews and surveillance videos guided investigators to locate the person responsible for the grass fire. They determined that Sossaman threw an M-100 pyrotechnic device into the field behind the apartment complex which ignited the dry grass. Through the investigation, Sossaman was also found to be on felony probation. During a search of his apartment, they located a loaded firearm along with several other illegal fireworks.

Weather conditions at the time — temperatures in the upper 90s with wind gusts between 15-20 mph — quickly fed the fire into the neighboring apartments. Crews, including East Contra Costa Fire’s Battalion 5, stopped the grass fire from spreading across the gully. Because of this, the apartment west of the fire were protected. 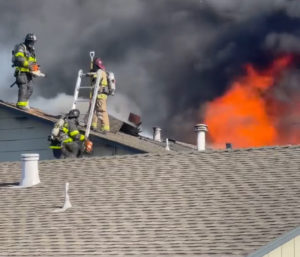 Additional companies worked to extinguish the structure fires. They searched 10 separate apartments that were either on fire or in immediate danger of catching fire. Strong winds blew the fire across a breezeway to adjoining apartments. A coordinated fire attack allowed the fire fighters to extinguish the fire by 6:30 p.m. Crews stayed on scene for approximately three hours to overhaul and salvage as much as possible.

The fire displaced 40 residents and the American Red Cross assisted with housing for those displaced.

All fire fighters escaped injury. Two civilians received treatment for smoke inhalation at a the hospital.

Con Fire’s Fire Investigation Unit urges residents to help them fight the crime of arson across the county by calling the Arson Tip Line at 1-866-50-ARSON. Residents can leave a recorded message about fire-related criminal activity in English or Spanish. Tips can be anonymous, but all tips are treated confidentially.