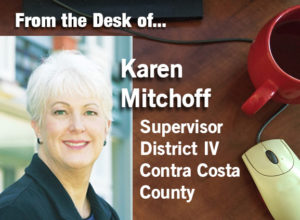 At the Board of Supervisors fifth redistricting hearing, the board accepted a proposed final map (pictured above). The map has a few tweaks and changes from the boundaries of 2010. These changes went into effect immediately.

A section of northern Concord is leaving District 4 and joining District 5, represented by Supervisor Federal Glover. This area is bordered by the airport to the west, Arnold Industrial Way to the north and the railway right-of-way to the east. If you live in this area, you can contact Glover at 925-608-4200.

Continuing clockwise east of Clayton, the Morgan Territory area has joined District 4. This area was once represented by District 3 Supervisor Diane Burgis, The change extends the district eastward through the vast majority of Mt. Diablo State Park and the surrounding unincorporated lands.

Perhaps the largest change to the district is as you continue east along its southern border. Portions of downtown Walnut Creek, once represented by District 2 Supervisor Candace Anderson, have joined District 4. The boundary along the southeastern corner of the district follows 680 north, turns east at Highway 24 and then north again at Acalanes Ridge along the boundary with the city of Lafayette to include that neighborhood and part of the open space to the community’s north.

Finally, the district boundary continues north as it did previously along Pleasant Hill Road. It tracks the eastern edge of incorporated Pleasant Hill and then turning west along the border with Pacheco and including Buchanan Field.

For those who now newly reside in the boundaries of District 4, I am glad to be your representative on the Board of Supervisors. I look forward to serving you as your elected official for Contra Costa County. If you should ever have questions, concerns or need help with matters pertaining to the county, I invite you to contact my office at 925-520-7100 or send an email to supervisormitchoff@bos.cccounty.us.

Please contact my office if you have any questions about the new boundaries of District 4 or the redistricting process as a whole. I look forward to hearing from you.