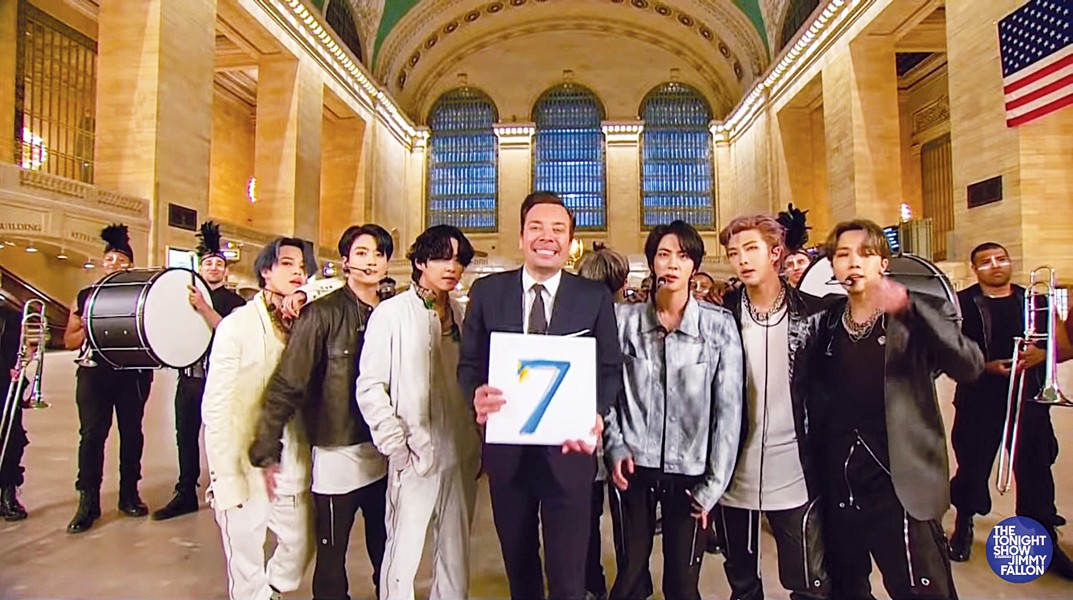 The Blue Devils are used to being in the spotlight as the unparalleled leader in the drum corps universe over five decades.

BTS is equally successful this decade in the music world and the South Korean K-pop superstars dialed up the Concord organization when they reached out earlier this year to BD Entertainment to supply musicians to use in the video of the lead single On for their new album ‘Map of the Soul:7.’

The album was No. 1 on the Billboard 200 in its first week of release last month. It is the group’s fourth US number one album, making them the fastest band since the Beatles to have four No. 1 albums in less than two years.

The video was followed by a Feb. 24 appearance for BTS on The Tonight Show with Jimmy Fallon. The group performed On in Grand Central Terminal in New York City with BD Entertainment musicians and 40 dancers from a Los Angeles studio backing the seven members of BTS. Filming at a closed down Grand Central Terminal took place in the early morning hours of Feb. 8. Click here for video of the Tonight Show performance.

According to NBC, the broadcast generated 4.2M interactions across Twitter, Facebook and Instagram. It was the second most social episode of any late-night show ever, trailing only the Stone/BTS on Saturday Night Live.

BD Entertainment is the professional entertainment division of the BD Performing Arts organization that has grown out of the Blue Devils Drum & Bugle Corps based in Concord with its unprecedented 19 DCI world championships.

The 12 musicians performing with BTS are all based in Southern California pursuing their musical careers. Nine of the 12 performed with the Blues Devils in their youth. Drum corps rules require performers to age out of competition at 21-years-old.

The On video was shot at Sepulveda Dam, which has been the scene of iconic movie scenes in Grease and The Italian Job. BTS management company Big Hit Entertainment reached out to BD Entertainment to provide the musical ensemble (2 trumpets, 2 trombones, 2 sousaphones and 6 drums) for the video.

BD Entertainment has had a busy early part of 2020. Its drumline went to the Super Bowl with the San Francisco 49ers on Feb. 2. They also performed at the 2016 Super Bowl in Levi’s Stadium. After the BTS recording and live performance BDE recently completed an exciting studio recording project at 20th Century Fox.

The Blue Devils are in the midst of prepping for their annual summer season that culminates for the A and B Corps in the first week of August competing at the World Championships.

The Blue Devils A Corps starts its national tour June 19. DCI West includes all three Blue Devils Corps at Stanford June 20. The tour finishes up Aug. 6-8 in Indianapolis when the A Corps seeks its 20th world title in 2020. After restricting Blue Devils B Corps to in-state performances last summer, the four-time champion BDB will again tour California before flying to the DCI Open Class finals in Marion, Indiana Aug. 3-4.

The Diablo Valley Classic Pacific Open Class Championships presented by System Blue at Los Medanos College in Pittsburg July 19 will feature both the B and C Corps.

Visit bluedevils.org for more details on all things Blue Devils.