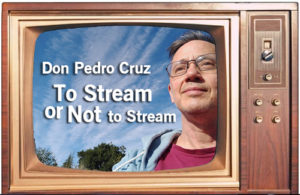 And like many of you, I watched a lot of streaming TV. Too much, probably. While I enjoy a good murder mystery or absorbing historical drama, I’ve most often found myself looking for a laugh.

And that’s how I ended up watching James Acaster’s Netflix special, Repertoire, dozens of times. I don’t typically re-watch shows, the exception being back before streaming, when anytime I was flipping channels and stumbled across Sandra Bullock in While You Were Sleeping, I was compelled to watch it again. It’s a feel-good show that lives up to the name. Repertoire also falls into that category.

James Acaster is a British stand-up comic. He’s tall, gangly, ginger-haired, awkward, so really born to become a comic. His Netflix series of four one-hour shows premiered in 2018 and I could watch the entire show all the way through again right now and still laugh as much as the first time. Sometimes I put it on while working (from home, obviously), and I know every bit well enough that I can just look up from the computer every so often and laugh at the payoff.

The show has four parts, Recognise, Represent, Reset and Recap. It all takes place on a stage with a live audience. And, while each part is a collection of funny bits and storytelling, Acaster weaves through it a disjointed yet intriguing narrative. A seemingly random aside during one bit is later revealed to be the payoff for a joke that surfaces much later. The comedy often starts off as a nonsensical anecdote, but then twists to reveal much greater meaning, at once amusing and insightful.

One of the story threads that recurs throughout the series is that Acaster is not really a comedian, but actually living in witness protection after turning in his fellow criminals when their genius scheme to resell the same jars of honey over and over all went wrong. There’s also a tragic tale involving a wooden decoy duck that calls back a much earlier bit about his research on how people feel about bread, as well as an unfortunate remark he made about a friend that he quickly regretted. After a while you realize that each bit of nonsense is leading you to something else.

The delight in this series starts with the absurdity of his stories, all told with dead-pan seriousness. Some may be true; most seem made up. And it doesn’t matter. He’s such an adept storyteller that it’s hard to know the difference. When we see later how the nonsense suddenly comes together, the surprise is rich and satisfying. James’ comedic concoction allows both his longing for human connection and his frustration with life’s inherent unfairness to shine through. He leaves you smiling, but also feeling like you’ve had an experience that was more than just a laugh.

If you haven’t heard of Acaster and/or aren’t sure you want to commit to 4 hours of British stand-up, I recommend dipping your toe in with a YouTube clip or two from the special. Check out “James Acaster on the Absurdity of the British Empire” or “Banana Revenge” to get a feel for what to expect.

Don Pedro Cruz went to film school before becoming a baker. He then got into publishing at several tech magazines in San Francisco before moving to the newspaper world as a graphic designer. He also writes stuff.