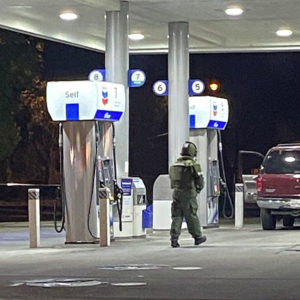 PLEASANT HILL, CA (Jan. 2, 2022) — It’s not safe to drive around with a homemade explosive device in your car and it’s definitely not ideal to stop at a gas station.

Last night, the Pleasant Hill Police graveyard team stopped and arrested two subjects who were found to have a homemade destructive device in their car. The incident happened at the Pleasant Hill Chevron (1705 Contra Costa Blvd). Station employees shut down the gas pumps and closed the business as the incident unfolded.

Due to the volatile nature of the device, the Walnut Creek PD Bomb Squad responded to the scene to render the device safe.

A statement from the Pleasant Hill PD says: “Making and possessing explosive devices is not safe. It puts the fabricator and the entire community at risk.”

In this case, the arrestee was charged with PC 18710, Possession of destructive devices or explosives. The charge is known as a “wobbler” meaning it can be charged as either a misdemeanor or a felony. No word yet on which will be charged.

Pleasant Hill Police thanked their partners at Walnut Creek Police Department for their assistance at the scene.