PFLAG ClayCord, the Rainbow Community Center, and dedicated parents and youth from local Gender and Sexuality Alliances (GSAs) began planning the county’s first multi-school Pride Prom last July. It was a place where youth could show up and be exactly who they are, solo, with a date, a friend or their friend crew, with no rules of what they were “supposed” to wear or how they “should” express themselves.

Guests were checked in with the loving presence of LGBTQI+ parents and allies, including school administrators and leadership from two counties. They received a ZOX Progress Pride bracelet keepsake (with proceeds benefiting the Trevor Project), selfie lights and sticks from the Contra Costa County Office of Education Tobacco Use Prevention Education Program and additional queer-affirming swag in Pink Spots bags. 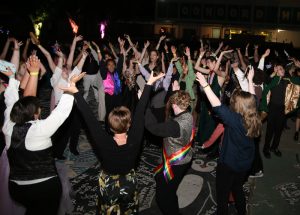 The theme of an Enchanted Forest, from Cottage Core roots, featured lighted lanterns strung across the courtyard and cascading rainbow-lit trees. Queer-identified DJ Christie, of KOSF 103.7, played all the perfect songs requested.

If anyone wanted to take a break, they could meander over to the various backdrops for singular and group selfies, partake in delicious Pride-themed appetizers (the rainbow fruit sticks were amazing) and sweet bites catered by Mt. Diablo Unified School District’s Serendipity student program, or visit the Rainbow Community Center table to pick up safe sex packages, LGBTQI+ flags and a crown of their choice that they could don with pride.

The students danced the night away, supported by chaperones in light-up rainbow leis, amongst tiny mushrooms, forest friend statues and overflowing love. There was even a real-life ground squirrel family of nine that peeped their heads up from time to time to check out the ruckus. 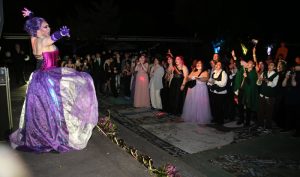 The incomparable Anna Mae Coxxx provided two special drag performances, which were met with enthusiasm as many experienced live drag for the first time. Pride flags waved above the crowd in unison during poignant renditions of Whitney Houston’s “I Will Always Love You” and the closer, Gloria Gaynor’s “I Will Survive.”

Events like Pride Prom are crucial for our LGBTQI+ youth’s existence and to support their well-being and mental health. These spaces affirm they belong and show they deserve to be embraced for exactly who they are, with no apologies and misgivings but rather strength, pride and boundless love.