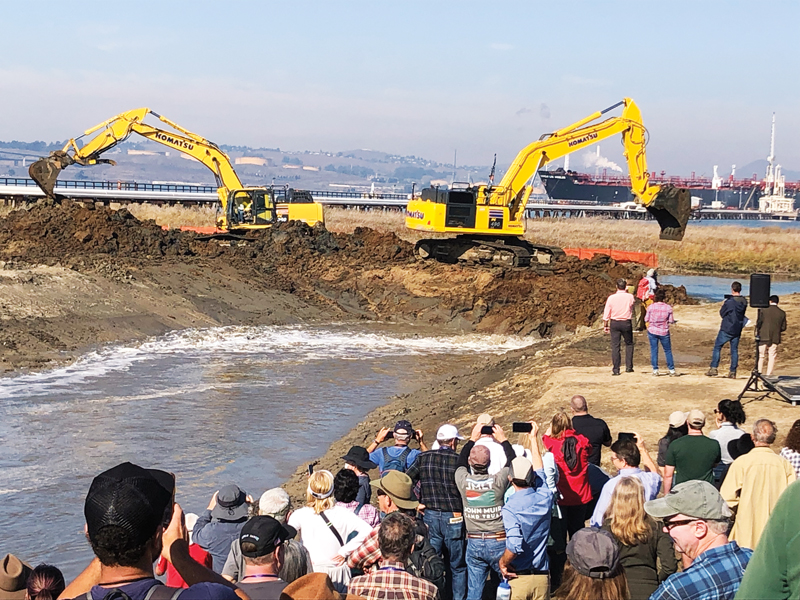 CONTRA COSTA COUNTY, CA (Nov. 11, 2021) — Normally, a hole in a levee and the sound of rushing water is not an occasion for speeches and cheering.

But on the morning of Oct. 29, as some 250 spectators watched, two backhoes deliberately and ceremoniously cut through a levee holding back the Suisun Bay from Pacheco Marsh waiting on the other side. Emotions ran high as salt water rushed through the breach to claim its rightful home on the Martinez shoreline.

Just days before the planned breach, epic storms dropped more than 7 inches of rain flooding the entire marsh. Crews worked for days to pump out more than a million gallons to assure the waters flowed into the marsh as planned.

The dramatic breach was the result of a 20-year, $24.5 million partnership between the John Muir Land Trust and the Contra Costa County Flood Control District to restore 212 acres of Lower Walnut Creek. This is the largest public works project in the county’s history.

Vegetation will grow and wildlife will repopulate rapidly with the addition of 31,000 new native plants. Migratory birds will return. The marsh will become an international birdwatchers’ destination,” Linus Eukel, JMLT executive director said in his remarks.

The Mt. Diablo Audubon Society has already counted more than 80 species of birds in the area.

Until the mid-19th Century, merchant ships sailed up the Walnut Creek and its tributaries. Salmon spawned. Grizzly bear and elk roamed the area. While it’s possible the salmon may be back, the bears and elk will not.

As the area industrialized, the marsh was diked and drained and sewage, industrial waste and refineries replaced the birds and fish. The area was a dumping ground for dredging projects from all over the Bay Area.

Over the years, the county acquired the land a few parcels at a time through tax defaults, purchases and donations. In 2002, it bought 122 acres from a towing company that planned a junkyard there. In 2018 Marathon Petroleum donated the last 18 acres needed to move ahead.
The Trust has set aside $5 million for public recreation use.

The Iron Horse Regional Trail will be extended three miles from its current end at Highway 4 into the Waterbird Regional Preserve. From there 2.4 miles of trails and pathways will wind from the staging area through the preserve. Amenities will include three 20-ft high viewing areas for birdwatching, interpretive boards, an education center, kayak launch and restrooms.

The goal is to have the public areas open by 2023.

The restored marsh will help alleviate stress to the shoreline caused by rising sea levels and will act as a carbon filter to help restrain greenhouse gases.

For more information on the John Muir Land Trust and the Pacheco Marsh, go to jmlt.org.