CONTRA COSTA COUNTY, CA (June 22, 2022) — Imagine sitting with Andrew Lloyd Webber as he was creating “Phantom of the Opera,” or while Lin-Manuel Miranda was inventing his version of “Hamilton.”

Who answered when the artists asked: “What do you think of these lyrics?” or “Do you like this powerful crescendo as the Phantom comes down the great staircase during the Masquerade Ball?

I recently had the privilege of being invited to be with the author of a new musical and his co-creators as the work emerged from their minds, with computer keyboard and pencil rapidly embellishing their thoughts.

Jim Maher has embarked on an exciting new musical interpretation of “The Invisible Man,” based on the H.G. Wells novel published in 1897 and the theatrical productions that followed. In the hands of this talented musician and author, the story has been transformed into a powerful musical format and reconfigured verbally to fit a more modern timeframe.

Both haunting and unnerving, “The Invisible Man” musical comes alive at the Campbell Theater in downtown Martinez on Friday, June 24.

The story centers around a mysterious man, Berkeley doctor and scientist Jack Griffin (Christian McCooey). He left the field of medicine to devote himself to research into optics, and while doing so, discovered a way to change a body’s refractive index until it was comparable to that of air – so that it neither absorbs nor reflects light.

He has become an excessively reclusive, irascible, unfriendly and introverted individual who spends most of his time in his residence working to near exhaustion on his formulas and chemicals. One of the principal chemicals he is experimenting with is making him go mad and has transformed him to become invisible.

The doctor becomes obsessed with the belief that invisibility will allow him to become very powerful and perhaps let him get even with those impeding his progress.

He also discovers that while being invisible and irascible, it is very difficult to continue doing his work while having to deal with other humans for supplies. Consequently, while invisible, he must don unique clothing, along with facial bandages and dark glasses, a costume that makes him look like a man who has been injured in a serious accident.

The intensity of his study, and the cost of his materials, has forced him into a perilous predicament where he cannot pay his rent or buy food. He has no other option but to seek assistance from a now married ex-girlfriend, Mary (Angelina Donhoff), and her husband Robert (James Schott).

This ploy allows him to hide his invisibility until he finds a way to reverse the process. His battle for survival causes him to become even more chaotic and enraged, leading him into a state of irreversible madness. The situation becomes more fearful and foreboding in the play’s new storyline.

Maher invites you to join him and his company of actors as they open this spellbinding tale that will keep you in suspense until the final searing moments.

The lyrics and exciting music will resonate throughout the evening.

The play runs June 24-July 10 at 636 Ward St., Martinez. Visit https://jimmaher1.com/ to purchase tickets in advance with a small service fee. Tickets are also available at www.campbelltheater.com or at the theater. You must provide evidence that you are fully vaccinated, but masks are not required. 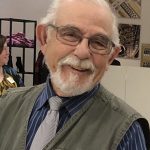 Charles Jarrett is a journalist, photographer and voice-over artist. He is a member of the San Francisco Theater Critics Circle. His reviews appear frequently in the Orinda News, Martinez Gazette and Rossmoor News.