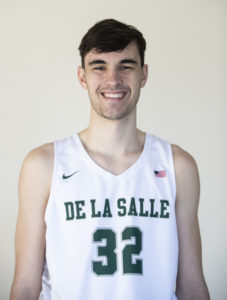 CONCORD, CA (Feb. 20, 2022) — First-year head coach Marcus Schroeder has his De La Salle basketball team in the midst of post-season play and part of the reason the Spartans are one of the top teams in North Coast Section is the continuing development of power forward Flannigan. The senior is following older brothers Ryan (baseball) and Andrew (basketball) in wearing a DLS uniform.

The younger Flannigan played CYO basketball from third through eighth grades for St. John Vianney, although he attended St. Francis of Assisi in Concord for his middle school years. Schroeder was a standout on the St. Francis CYO team years ago before he went to De La Salle, winning the 2006 State basketball championship, and then playing four years at Princeton. He spent 11 years on the Saint Mary’s College basketball staff [Page 10] before returning to his alma this year.

Flannigan’s St. John Vianney squad won the eighth grade Oakland Diocese CYO championship. He played baseball his freshman year at De La Salle but has concentrated on basketball since. “John has worked tirelessly to turn himself into a really good high school player. He has improved his athleticism, has continued to grow his skill, and he has developed into one of the leaders of this team. He brings it every day and has an incredible attitude,” coach Schroeder said of his tallest player. In his second varsity season Flannigan averages seven points and five rebounds for the defensive-minded team while shooting 53% from the field including 37% from the three-point line. 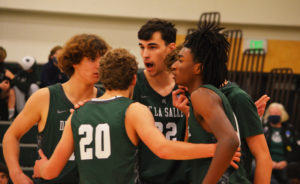 DLS defeated Granada last Saturday for the East Bay Athletic League playoff championship and began North Coast Section competition this week as the No. 2 seed in the Open Division. The Spartans won four of the last five NCS Division I titles. (no playoffs were held last year).

The Pioneer congratulates John and thanks Athlete Spotlight sponsors Dr. Laura Lacey & Dr. Christopher Ruzicka who have been serving the Clayton and Concord area for over three decades at Family Vision Care Optometry.

Do you know a young athlete who should be recognized? Perhaps he or she has shown exceptional sportsmanship, remarkable improvement or great heart for the sport. Email your nomination for the Pioneer Athlete Spotlight today.