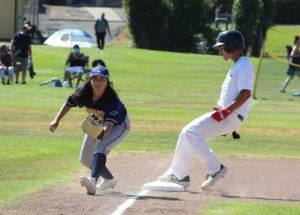 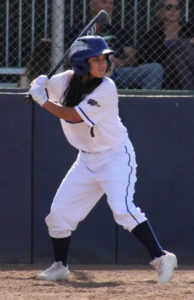 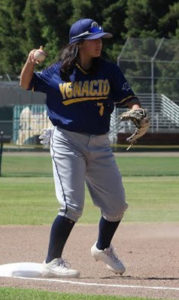 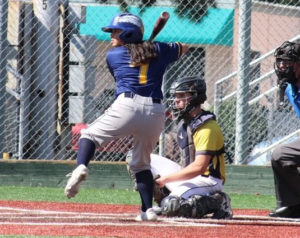 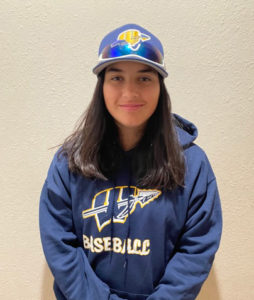 When the Ygnacio Valley baseball team takes the field for games this spring the starting third baseman is actually a third base person. Freshman Christina Noonan is that rarity in her sport, a female varsity baseball player.

Her dad Pat says when she was just three or four years-old “it made most sense to me to put a smaller baseball into her hand than a huge softball. The baseball was a better size.” The Concord resident began playing organized baseball at age seven in the brand-new Concord Junior Giants program before joining Continental Little League the following season.

Many talented girls play baseball in their earliest years before shifting to softball, an all-female sport competed at the highest levels in high school, college and beyond. For Noonan “baseball is and always will be my favorite sport to play or watch.”

Ygnacio Valley varsity coach Mark Ferguson has faced the same challenges as his fellow high school coaches as the past two spring seasons were either started and then stopped (2020) or condensed (2021). But his Warriors have had the added element of not having a home field. Their on-campus ball diamond was deemed unsuitable to play on, so they practice at nearby Oak Grove Middle School.

When the Warriors are the home team Noonan says we “play in a white uniform but at our opponents field.” The Diablo Athletic League went to a schedule starting in 2019 of having both baseball and softball games between two schools played in the same week. So, when the Warriors play Berean Christian this week both games will be on the Eagles field in Walnut Creek with Ygnacio batting last as the home team in Tuesday’s game.

Ferguson is in his second year of his second stint as Warriors baseball coach after also coaching at Concord High and Acalanes. Noonan is his first female player. He met her and his starting freshman catcher Juan Palacios last year when he would go to Oak Grove when the school was let out early on Wednesdays with bats and balls to meet kids in the After School Program and play ball with them while letting them know about the baseball program at YVHS.

The coach says having Noonan on the team has been “very uneventful” as her teammates have “embraced her” and she’s earned her third base starting spot after also playing some on the other side of the diamond at second.

Noonan says, “I plan on playing baseball all four years. I have considered playing softball but not for my school.” When her sophomore year begins, she hopes to attend all her classes on campus rather than the two days a week she has been going to for the past month or so. Noonan definitely plans on playing basketball (winter) and perhaps also volleyball (fall) next term. She will join back up with her baseball teammates in the spring. She played basketball since kindergarten until her Oak Grove team’s season was cut short a year ago due to the pandemic. Away from her sports pursuits she “loves photography, hanging with my friends, hiking, fishing and video games.”

Do you know a young athlete who deserves  recognition? Perhaps he or she has shown exceptional sportsmanship, remarkable improvement or great heart for the sport. If so, send your nomination for the Pioneer Athlete Spotlight today to sports@pioneerpublishers.com.