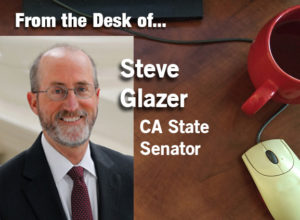 It’s a nice reward for all the hard work put in by key allies and friends when the governor ushers them across the finish line with a signature. It’s especially gratifying to have important legislative priorities for my district signed into law.

Gov. Gavin Newsom signed three such bills and proposals that I’ve been working on with partners, in some cases, for years.

SB19 will allow licensed winegrowers or brandy manufacturers to operate two off-site tasting rooms under their winegrower licenses. This bill, which takes effect Jan. 1, 2022, will particularly help small and family-owned wineries to operate as California continues to recover from the pandemic.

There are about 55 wineries in my district, including in Livermore, Oakley, Brentwood and Moraga.

Small and family-owned wineries have struggled because they rely heavily on visitors and direct sales. With tourism taking a terrible hit from the pandemic and consequences of the wildfires, I’m glad Gov. Newsom recognized that these wineries need that additional outlet to provide tastings and sales to their customers.

Under SB60, cities and counties will be allowed to impose increased penalties on short-term rental hosts who violate local property rental laws. SB60, which took effect immediately, authorizes localities to impose fines up to $5,000 for a violation of a short-term ordinance.

The law is an attempt to rein in house parties, sometimes violent, that have been occurring at short-term rentals because of lax oversight of these properties. These large gatherings have made some short-term rental properties the sites of underage drinking, brawls, noise complaints and violence.

Local governments will now have the tools to ensure the safety of those who want to continue to use short-term rentals and of residents who live nearby.

The legislation was sparked by a spate of violence at short-term rental properties, most notably a mass shooting in Orinda, where five people were killed. Other abuses at short-term rentals occurred in Los Angeles and other locales in Northern California, including a party at a Sunnyvale short-term rental where a teenager was shot and killed in August after violence erupted at the gathering.

Smaller fines were ineffective in deterring violations. Hosts could charge so much rent for big houses that the fines were just seen as a cost of doing business.

The use of short-term rentals has skyrocketed by 105 percent over just the past three years, according to vacation rental data compiled by AirDNA. Though short-term rentals offer a way to improve tourism and earn owners some extra money, their recent proliferation has allowed bad actors to use the platform to advertise and secure homes for large parties, often in violation of local ordinances.

The COVID-19 pandemic led to an increase in people using short-term rentals to evade public health restrictions on large public gatherings. Noise complaints as a result of parties have tripled since the start of the pandemic, according to Host Compliance, which tracks legal compliance among short-term rentals for 350 cities and counties in the United States.

In the last half of 2019, 42 people were shot inside or just outside a short-term rental property nationwide and 17 people died.

Thousands of acres of East Bay wilderness threatened by the expansion of an off-highway vehicle park will instead be preserved.

The legislation, approved in the governor’s recent budget bills to take effect immediately, will end plans to expand the Carnegie State Vehicular Recreation Area into the 3,100-acre Tesla parcel in the southeast corner of Alameda County. Scientists have described the area as a biologically unique habitat, and Native Americans have long considered it a sensitive historical site.

That land will now become a new state park closed to motorized recreation. The state will reimburse the Off-Highway Vehicle fund for the purchase price of the land, its appreciation in value and the money spent planning the expansion, which was opposed from the start 20 years ago by nearby residents and public agencies. That money will go toward the purchase and development of an off-road park at another location.

Our community and region will preserve this natural and cultural treasure, leaving it pristine for future generations to enjoy. Meanwhile, off-road enthusiasts will be able to keep their current park and receive funding to develop another park on land that’s more suitable to that kind of recreation.

I appreciate the hard work that so many key individuals played in moving this critical environmental and cultural issue to the governor’s desk, and, of course, for the governor to work with all the players to sign this important agreement.

I was proud to partner with Assembly member Rebecca Bauer-Kahan, the Sierra Club, Friends of Tesla Park, and other environmental organizations and individuals in getting final approval from the governor. Earlier, former Assembly member Catharine Baker worked with me on the same issue.

Steve Glazer is the California State Senator representing the 7th Senate District. If you have questions about this or other topics, you can reach out to him at ­sd07.senate.ca.gov.