CONCORD, CA (Aug. 20, 2021) — A recent post on social media by Councilman Edi Birsan touted a handful of new businesses moving into the Todos Santos Plaza area and Park & Shop Center. The question is, are things really happening in Concord with the lessening of COVID-19 restrictions for business and the public, or are these simply one business filling the space where another went away in the past year?

Concord Economic Development Manager Marie Suvansin says, “Things are actually happening in the background.” She enumerated reports from Sunvalley Shopping Center, Willows Shopping Center, The Veranda and Todos Santos Business Association that point towards positive movement in filling vacancies that proliferated since the pandemic struck in full force in March 2020.

“There are a lot of positive reports and signs pointing to the local economy recovering,” she said.

Councilman Birsan listed new businesses in both Park & Shop and Salvio Pacheco Square. In all but one case they are one restaurant replacing another eating establishment that had vacated the space.

Behind that portion of Park & Shop, the sale of the 102,000 square foot building which housed Fry’s Electronics is in escrow for a company looking to put retail in the massive building.

Another publication reported earlier this month that the Bel Air Shopping Center at the corner of Treat Blvd. and Clayton Rd. was readying a major renovation. Adria Giacomelli, senior vice president and partner of the center’s leasing agent Lockehouse Retail Group of Walnut Creek, says much of that story was inaccurate.

The company is discussing plans with owner Myron Zimmerman “for the next three to four years” that will focus on a 23,000-37,000 square foot grocery store coming in as an anchor tenant along with CVS. She says it will be after the new year before anything is formalized.

Staples currently has the corner space of the center closest to Clayton Rd. Their lease expires in two years and whether they stay in the same location, possibly downsize within the center or move out entirely has not been discussed.

Giacomelli says the middle section of the center, which is a veritable ghost town of empty storefronts, likely will be demolished with the center anchor store built out into the current parking area protruding beyond from the fronts of Staples and CVS.

The Smog Center on the street corner is proposed as a site for a drive-through restaurant, but Giacomelli says the drive-through is “pretty far off.”

Lockehouse has engaged with grocery stores and restaurants concerning the center, which Zimmerman has owned for decades.

The center also intends to continue to have a U.S. Post Office, contrary to the published report. Dollar Daze did move across Treat Blvd. next to Supercuts and Little Caesar’s in Treat Plaza.

Giacomelli says that, speaking generally about the post-COVID environment in commercial retail real estate, personal services and fitness leases are taking place while most food industry business is simply second-generation turnover from one tenant to another.

The Hot Dog Palace, a staple on the corner of Salvio and Grant Sts. for decades, has closed and the new business owners are currently working on redoing the interior. It is anticipated the menu may change from hot dogs to hamburgers.

Kitty corner from there is E.J. Phair Brewing Company which reopened after the initial greenlight for restaurants and bars to begin serving but closed earlier this year. There seem to be various rumors swirling around about the long-time restaurant-bar, but Suvansin has been informed it will be reopening after a remodel.

Two blocks away on the corner of Concord Blvd. and Grant St., the Side Gate Brewery and Beer Garden will be opening soon, adding another stop on the burgeoning Concord Beer Trail. 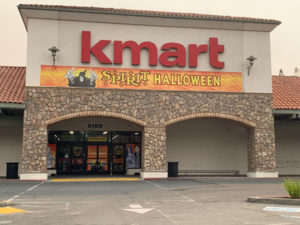 At the other end of Concord, the 90,000 square foot former Kmart on Clayton Rd. had been serving as a storage location for the Food Bank and soon will house a Spirit Halloween superstore this fall on a short-term lease. Concord Mayor Tim McGallian says the city is still working on bringing a Target store there.

The Willows has found a tenant for the former Pier 1 Imports location. Five Below, a specialty discount store featuring merchandise primarily priced $5 and below, is moving into the center on Diamond Blvd. The Philadelphia-based chain of over 1,000 Below Five stores is directed at tweens and teens.

The Veranda reports all its businesses have reopened, and it has new tenants signed that will bring the newest Concord center to 98 per cent capacity.

Despite continuing rumors about Sears closing its Sunvalley location, Suvansin says that location is among the best performing Sears in the region. She adds that Sunvalley reports the center is doing “very well.”

The economic development manager says Concord has been in discussions with national retailers about the merits of locating in the city. “There’s more to come,” Suvansin added. Mayor McGallian stated, “There are more successes than failure. We have been fortunate in Concord.”