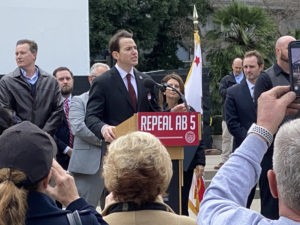 To comply with California’s new “gig” law, Solo Opera founder Sylvia Amorino is pitching in her own money to save the upcoming production.

“The dilemma is we are already locked into our August show, ‘Scalia/Ginsburg,’ with theater, publisher, grantors and performer contracts,” said Amorino, artistic director of the Concord-based troupe. “There is no turning back.”

The Assembly bill, which went into effect Jan. 1, makes it harder to label workers as independent contractors.

Initially targeted at companies like Uber and Lyft, AB5 is having dire consequences for small businesses, non-profit groups and their freelance workers.

The law uses an “ABC” test for workers to determine worker status:

A. They perform tasks under a company’s control.
B. Their work is integral to the company’s business.
C. They do not have independent enterprises in that trade.

If they meet any of the above tests, these workers are now deemed employees entitled to benefits such as minimum wage, workers’ compensation, unemployment insurance, expense reimbursements, and paid sick and family leave. Employers must also pay half of the employees’ Social Security tax.

Because the law could cost employers an estimated 30 percent more, many companies are no longer using the contractors – leaving workers out in the cold.

Sponsored by Lorena Gonzalez, D-San Diego, the new law exempts dozens of professions – from doctors and lawyers to commercial fisherman and manicurists. Truck drivers won a temporary injunction in January, but freelance journalists failed to get a waiver on the limit of 35 “content submissions” a year.

U.S. District Judge Philip Gutierrez in Los Angeles said the journalists waited too long to challenge the restrictions, but he said he will take more time to consider their objections.

Uber and Postmates have filed a lawsuit and are joining companies like Lyft and DoorDash in donating to an initiative proposed for the November ballot that would keep drivers and couriers as independent contractors while allowing them to receive some benefits.

Roxanne Pardi, co-founder of the Clayton Theatre Company, is hopeful about a petition from Theatre Bay Area that has more than 70,000 signatures asking for non-profit theater companies to be exempt.

Meanwhile, Pardi is proceeding with the opening of “The Musical Comedy Murders of 1940” on March 19. “We’re all just kind of going by the skin of our teeth and going ahead with the spring show,” she said, adding: “I don’t think they thought through the ramifications for anyone who gets a 1099.”

About 350 people rallied in Sacramento on Jan. 28 led by Assemblyman Keven Kiley, a Republican who is co-authoring AB1928 to freeze portions of AB5. Amorino said Republicans, Democrats and Independents were “all fighting for the same thing” at the Capitol gathering.

“AB5 is an economic issue, not a partisan one,” she said.

Support for AB5 was mainly along party lines, and Assemblyman Tim Grayson, D-Concord, was among those voting yes. Grayson’s office did not respond to a request for comment.

Amorino said the protest was a venue to “get the word out and bring attention to AB5.”

People are discussing the issue en masse on the Facebook site Freelancers Against AB5, and Kiley has an online compilation from “gig economy” workers who have been negatively impacted. Contributors include bloggers, freelance writers and photographers, translators and sign language interpreters, occupational and massage therapists, medical transcribers and court reporters, musicians and those in the film industry – and even a postpartum doula and lactation educator.

Haana, a music producer, said the law “will be the death of the music industry in CA.” Jennifer, a freelance American Sign Language interpreter, said AB5 “would cause serious harm to the provision of interpretation and translation services to deaf individuals.”

Renee, a small business owner in the entertainment transcription field, summed up the issue by saying: “The law is causing chaos, grief, fear and anger in the CA freelance community.”

The issue also has national implications, with the U.S. House of Representatives passing the Protecting the Right to Organize Act on Feb. 6. The bill would allow more contractors to be given the status of employees for the purposes of union organizing. However, the Republican-controlled Senate is unlikely to take up the bill.

Back in California, Pardi doesn’t see a future for her theater group if there isn’t a legislative fix. “We’re just barely getting by as it is,” she said.

“We will have to go dark or take a hiatus,” Amorino noted. “The costs would be unsustainable for us.”

Related story: Is AB5 closing the curtain on community theater?