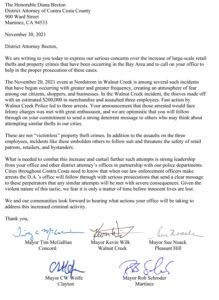 The mayors of Concord, Clayton, Walnut Creek, Pleasant Hill and Martinez say they are worried about organized retail theft and concerned with the lack of consequences for the perpetrators.

The mayors are not alone. In a report to the city council last April, Concord police chief Mark Bustillos expressed frustration with repeat offenders and urged the Council to put pressure on the district attorney for more aggressive action.

Concord has its own plan for a municipal court to prosecute low-level property crimes. This is legal, says city attorney Suzanne Brown, but only with the permission of the district attorney. Mayor Tim McGallian says, to date, Becton has not been supportive.

Instead, Becton says the county will set up Neighborhood Community Courts where citizen arbitrators will handle so-called “nuisance cases” without prosecution. At a virtual Clayton City Council meeting Oct. 19, she used an example of someone caught painting graffiti at City Hall. The arbitrators would hear the case and say, “I think you should repaint the building.”

Councilmember Jeff Wan said this is not what victims want. They want those responsible “to be held accountable to the full extent of the law.”

The Concord City Council will hear a report from the district attorney at the Dec. 14 virtual meeting. For a link, go to cityofconcord.org before the meeting.

The text of the letter is here:

We are writing to you today to express our serious concerns over the increase of large-scale retail thefts and property crimes that have been occurring in the Bay Area and to call on your office to help in the proper prosecution of these cases.

The November 20, 2021 event at Nordstrom in Walnut Creek is among several such incidents that have begun occurring with greater and greater frequency, creating an atmosphere of fear among our citizens, shoppers, and businesses. In the Walnut Creek incident, the thieves made off with an estimated $200,000 in merchandise and assaulted three employees. Fast action by Walnut Creek Police led to three arrests. Your announcement that those arrested would face felony charges was met with great enthusiasm, and we are optimistic that you will follow through on your commitment to send a strong deterrent message to others who may think about attempting similar thefts in our cities.

These are not “victimless” property theft crimes. In addition to the assaults on the three employees, incidents like these embolden others to follow suit and threatens the safety of retail patrons, retailers, and bystanders.

What is needed to combat this increase and curtail further such attempts is strong leadership from your office and other district attorney’s offices in partnership with our police departments. Cities throughout Contra Costa need to know that when our law enforcement officers make arrests the D.A.’s office will follow through with serious prosecutions that send a clear message to these perpetrators that any similar attempts will be met with severe consequences. Given the violent nature of this tactic, we fear it is only a matter of time before innocent lives are lost.

We and our communities look forward to hearing what actions your office will be taking to address this increased criminal activity.