It’s a day to memorialize those who have been murdered as a result of transphobia and to draw attention to the continued violence endured by transgender people. By 2010, more than 185 cities throughout more than 20 countries participated. The Rainbow Community Center will hold a vigil 6-7 p.m. Nov. 20 at Todos Santos Plaza in Concord.

Arriving in 1962 and growing up in San Francisco, I’ve seen a lot. I used to love “going out on the town” near the bay. Most of my friends would not venture beyond the trans-friendly venues for fear of their safety. When a few of us did wander further, I met people who would tell me that they were glad to meet me because I broke all the perceptions they had of trans people … which were not good. These are the same types of perceptions that many people carry with them until they actually meet a transgender person.

This day, originated to pay tribute to transgender women, has evolved into also honoring those who have taken their own lives. Suicide has taken many trans people who have lost hope and didn’t know that they were a shining beacon of light that needed to plug in and light up people’s minds.

I could have very easily lost hope, too, but I knew that as a human being it is possible to connect with another human being. I learned that I can make a choice for myself – and it is liberating.

A study done by the Trevor Project, Suicide Prevention Organization for LGBTQIA+ Youth, found that the rates of suicidal thoughts have trended upward among LGBTQIA+ youth in America over the past three years. The survey found 45% of LGBTQIA+ youth had seriously considered attempting suicide in the past year. LGBTQIA+ youth of color had even higher rates.

Those who seriously considered suicide:

This year, 32 transgender people have been fatally shot or killed by other violent means. There may be more that were not reported or misreported. The majority of these people were Black and Latino/Latina/Latinx. This is why we have this day of remembrance for transgender folx and also to raise awareness about transphobic violence all over the world. 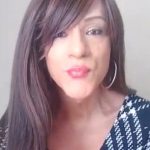 Cristina Zaldana is the Kind Hearts Food Pantry manager and volunteer coordinator for the Rainbow Community Center. The well-being of mind, body and soul are very important to Cristina, who has always felt a need to help others balance and navigate through tough times. “At this point, it is paramount that we invest in each other’s well-being.”