CONTRA COSTA COUNTY, CA (May 18, 2022) — If you look closely at Contra Costa Sheriff David Livingston via Zoom at the public safety candidates’ debate two weeks ago, you can see a little bit of Clint Eastwood in his eyes.

It’s as if he’s standing on a dusty road somewhere in the county, proclaiming it his territory – and he’s not willing to give it up.

Standing (actually, sitting) across from him is his opponent, brash newcomer Richmond Police Officer Ben Therriault, who wants to “clean up” the sheriff’s department of alleged corruption and bring it back to the people through transparency, new ideas and real-life experience of policing the streets.

The county sheriff – an elected position, Therriault points out, surprised by so many in the county who didn’t know that – represents 180,000 residents from Discovery Bay to North Richmond, a rich swath of diversity and, unfortunately, crime.

Therriault, an Iraq war veteran, has worn many hats in his career in law enforcement, something he’s wanted to do since he was 7 years old.

“I’ve been a detective, a patrol officer, a trainer, an SME (Subject Matter Expert) on the use of force by law enforcement, as well as president of the Richmond Police Officer’s Association and member of a statewide task force on POAs,” he says. “I’ve seen policing from the ground up, and I know what needs to change in our sheriff’s department: good leadership.”

Livingston stands on his record

It is that leadership, however, that Livingston says Therriault is lacking. The current sheriff, an attorney, led both the Pleasant Hill and Concord police departments before being elected sheriff 11 years ago. And he says he has more to do: He wants to improve the jails, oversee the recently approved staff increases and implement the use of body cameras approved with money from Measure X, something he calls “no small task.”

Throughout his tenure, he says he is most proud of expanding the role of deputies in the jails, canceling a controversial ICE (Immigration and Customs Enforcement) contract that would have impacted many immigrants in the county and watching violent crimes decrease – although he admits that property crimes, like smash-and-grabs at area shopping centers, are on the rise.

He has also added an elder abuse deputy and is planning for a state-of-the-art emergency operations center.

Those are orders as tall as a 10-gallon hat, and Therriault is skeptical that they will proceed in a way that will benefit the public.

“Sheriff Livingston is a reactive leader,” he says. “He is not looking at the issues of the day and coming up with long-term solutions.

“Community policing is more than just knowing your neighbors, it’s working with businesses, faith-based organizations and residents, and providing solace for them,” Therriault adds. “We can take down the bad guys; it’s just going to take a new way of doing things. I have the experience from all levels of policing to be able to do that.”

Meanwhile, Livingston is seen as a stringent supporter of his deputies, even those whose actions have been called into question – such as former deputy Andrew Hall, recently sentenced to six years in prison for using excessive force in the shooting of a mentally ill person in Danville in 2018. He does agree that working with the community at all levels is vital to law enforcement.

And you can bet those community residents won’t be hiding in a local saloon on June 7, but casting their very important votes for the next Contra Costa County sheriff.

If the drama of the sheriff’s race is too, well, taxing, voters are not getting a break in the county assessor’s race. The two candidates couldn’t appear more different, but the spectacle surrounding the race is just as intriguing. The sheriff’s race is not the only HBO-worthy contest in this critical election.

The laundry list of endorsements for Contra Costa County assessor candidate Floy Andrews is as long as a CVS receipt.

From Sacramento politicians to local governments and unions, the impressive lineup of supporters would make her seem like a shoo-in.

However, that’s of no concern to current assessor Gus Kramer, who is seeking another term. “I don’t want to be beholden to entities who will want favors,” says the veteran tax man, whose office was once seen as the Gold Standard in California.

But there is more to the race that is turning this election into a surprising soap opera.

No race is as unique as the assessor’s, however, chiefly because Kramer has been in the news lately not due to his tax acumen, but because he was the subject of a censure and Grand Jury trial over alleged racism and sexual harassment. The court debacle ended in a mistrial, and District Attorney Diana Becton chose not to retry the assessor.

Kramer then went back and demanded $325,000 in court fees from the Board of Supervisors, spurring a nasty relationship between the two. The board has yet to decide whether it will pay, but it’s been reported that it won’t because the county administrator who originally allowed it has since resigned – and possibly reneged.

Kramer has also accused the board of breaking the Brown Act by discussing his issues in private session, a violation when it comes to another publicly elected official.

“I am not a racist, and I am not sexist,” Kramer asserts, claiming he has had good relationships with women and people of all races and backgrounds, promoting many. He says the lawsuit was brought on by dissatisfied employees who were not promoted.

Andrews disagrees. “There is a toxic environment permeating the assessor’s office” because of Kramer’s “old boy” attitude and management style, with Andrews saying he is even grooming some on his staff to take over when he retires.

“The Grand Jury statements are salacious,” she says, adding that the testimony is available on her website at www.floyforassessor.com and a matter of public record.

“It only takes one person to deadlock a Grand Jury case like this,” says the attorney and former litigator.

Andrews, a resident of Point Richmond, admits she does not have a lot of experience in an assessor’s office, but she currently serves on the county Assessment Appeals Board. Besides her law background, she recently received a degree in ethics from Columbia University and was CEO of a nonprofit coffee roastery in Berkeley. “I have the background, the leadership and the ethics to beat Gus Kramer,” she says.

“I want to right that ship,” she says of the assessor’s office, which has been plagued with accusations for years, including Kramer’s misconduct and questionable property assessments. These are all cited on Bay Area New Group articles posted on Andrews’ campaign website.

“I can bring new blood, a new attitude and integrity,” Andrews says.

Kramer (www.guskramer.com) brushes off many of those allegations, calling himself “the hardest working man in the county.”
The personable assessor – who says he sits at the front desk every day to meet people and help them out – says he has ignored requests from county oil companies, cities lobbying for more sales tax revenue and individuals wanting parcel tax reductions.

“I have integrity,” he says. “I have high standards.”

Andrews says the race also centers around another major factor: bringing the 21st century into the assessor’s office, where the main computer system was developed in 1998 and “upgraded every year,” Kramer says.

The incumbent uses an older system that puts records on paper, “so we have a paper trail,” he says. “We need physical copies of many of these records. And if one system goes down, another is always working.”

Andrews says that is a waste of taxpayer money and may not be as accurate a system as a tax assessor’s office needs. “I bring more than a new face to the race,” she says. “I can improve assessment for the entire county.”

Nothing is sure except death and taxes, and this race certainly is a killer.

Email questions and comments to peggy.spear@gmail.com. 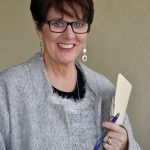