CONCORD, CA (June 26, 2021) — It was fitting that several hundred people gathered to remember Maj. Gen. Dan Helix at his beloved Concord Pavilion on June 26, after the former mayor died March 9 at age 91.

With many decorated officers in the audience, the memorial service included full Army military honors and a gun salute in recognition of his 41 years of both active duty and in the Army Reserve after enlisting as a private in 1948.

Helix served as mayor of Contra Costa’s largest city twice, with almost four decades separating the two terms. A list of his civic accomplishments would take up pages.

Former City Council colleague and longtime city treasurer Tom Wentling used “The Dash” poem by Linda Ellis to recount the significance of his friend and neighbor’s life between his 1929 birth and his death this year.

In particular, Wentling mentioned the 39 years Helix was a member of the Rotary Club of Concord, where he encouraged club members to grow the endowment to $1 million – a goal that was thought to be unattainable. Wentling says the endowment now sits at $1.3 million, allowing the service club to assist in many community efforts annually. 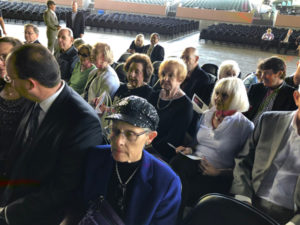 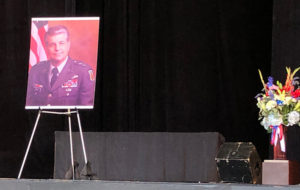 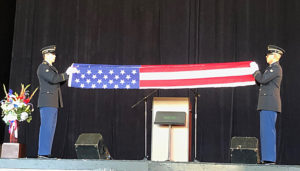 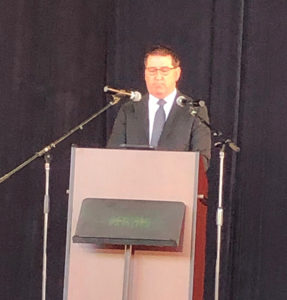 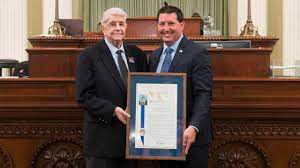 Four Helix grandchildren told stories of Grandpa Dan and the many life lessons he imparted to them, often without the grandkids realizing it at the time.

Daughter Mary, who helped organize the memorial with her mother Mary Lou, read a poem her father left with instructions to be read at his funeral. Mary Helix said she decided against dressing in traditional funeral black but rather in her dad’s favorite colors of red, white and blue.

Dan Helix Jr., who followed his father into the military, recounted stories from his childhood such as when his dad “gave me baseball” and how he served as a role model all his life. The younger Helix enumerated some of the military honors his father earned, most after turning down the chance to play professional baseball when the Korean War called him to duty.

Assemblymember Tim Grayson, who served with Helix on the City Council and was his prayer partner for the past 10 years, presided over the memorial.

Advocating for the Pavilion

Helix was a key driver in the construction of the Concord Pavilion. As mayor and a City Council member in the early 1970s, he negotiated with developer Ken Hofmann to get 122 acres of rolling land as a site for the Pavilion. It was part of a 300+ acre parcel on Kirker Pass Road that Hofmann was looking to develop for homes.

The Pavilion opened in 1975, and Dan and Mary Lou Helix founded the Concord Pavilion Associates in 1976 to support performing arts at the new facility.

The Helixes hosted a number of fundraisers to enable the Pavilion to offer more performing arts concerts – not all of which were financially viable from ticket sales alone.

The memorial concluded with a recording of his wife of 67 years, a concert pianist, playing one of his favorites: “How Great Thou Art.”

Helix was mayor when the City Council most recently contracted with Live Nation to continue operating the outdoor amphitheater. A key element of that 2013 agreement was to reclaim the name Concord Pavilion for the venue.

Carl Jefferson, who founded the Concord Summer Festival that led to the construction of the Pavilion, also had his memorial service at the Pavilion in 1995. The venue’s general manager Aaron Hawkins noted that the amphitheater has been the site of funerals for law enforcement members killed in the line of duty.

In his final public effort on behalf of Concord, Helix was the first chair of the Concord Naval Weapons Station Reuse Citizens Advisory Committee