CONCORD, CA (Sept. 12, 2021) — Fall quarter begins at UCLA on Monday and Yealimi Noh might have been sitting in her Concord home getting ready to start her junior year at Westwood on a full-ride scholarship that the Bruins golf team offered and she had verbally accepted.

But after an incredible run of success as the 2018 Rolex Junior Girls Player of the Year, Noh decommitted from UCLA and instead set her sights on a pro golf career, which she began before her 19th birthday.

Noh attended Carondelet High as a freshman and sophomore before being homeschooled to better concentrate on golf, so it’s been some time since she was in the classroom. This month, LPGA tour rookie Noh did get a report card and she finished near the top of her class (team).

The Golf Channel gave her a B+ after winning two matches and was tied with three teammates for the best grade for the United States team as the Americans lost to defending champion Europe 15-13 in the Solheim Cup at the Inverness Club in Toledo, Ohio over the Labor Day Weekend.

The leading website for the sport, Golf.com, rated the 12 members of the losing American squad and said, “One bright spot was more of the world being introduced to Yealimi Noh, a Solheim Cup rookie who made the most of her three matches.” She had the third best USA rating.

At the end of the biennial tournament after taking part in one match each day Noh said, “It’s been incredible, so much more than I imagined. It was kind of last minute, like getting a captain’s pick and all, but it was always on my mind the entire year and just before, too. Just actually being here and getting to experience all of this, all the fans, the crowds and just the atmosphere has been really incredible.”

This was Noh’s third taste of international competition and the first time her USA team lost. She was on winning 2017 Junior Solheim Cup and 2018 Junior Ryder Cup teams. It was soon after that Junior Ryder Cup win in France that she announced she would forego the UCLA golf scholarship and turn pro.

When Noh tied for 13th at this year’s final major, the AIG Women’s Championship in Scotland, she earned $85,328, bringing her official LPGA Tour earnings over the $1 million mark. Although Noh was a rookie last year, the LPGA ruled that because of the pandemic-shortened season the class of 2020 golfers would still be categorized as rookies this year.

Her summer results prompted USA Solheim Cup captain Pat Hurst to make Noh one of her three captain’s picks along with Brittany Altomare and Mina Harigae. 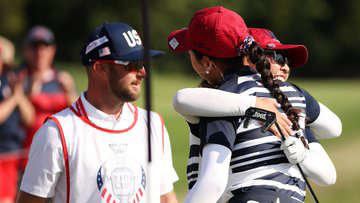 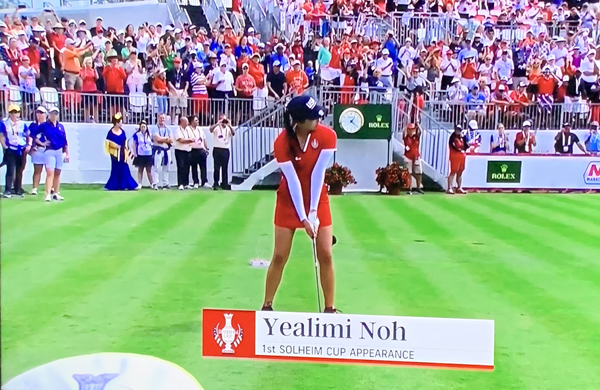 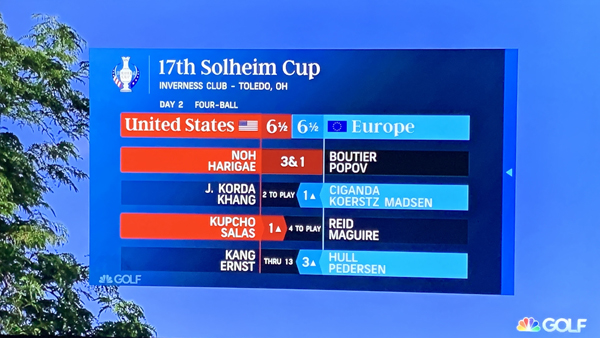 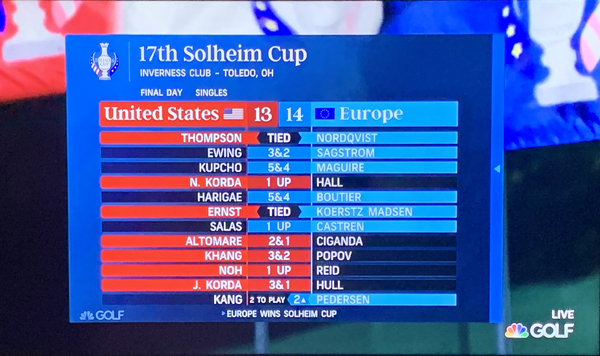 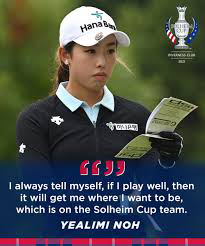 “This was an incredibly difficult decision, but I’m very happy to have Brittany, Mina and Yealimi as my picks for Team USA,” said Hurst. “Mina and Yealimi have played so well over the last two years, and just because they’re Solheim Cup rookies on paper doesn’t mean they’re rookies inside the ropes. I have no doubt they’ll be great competitors at Inverness.”

Harigae and Noh rewarded their captain’s faith by winning a Sunday afternoon fourball match 3 and 1 over European opponents, Sophia Popov and Celine Boutier.

The front nine saw the U.S. Solheim rookie duo make the turn with a 3-up lead but the Europeans birdied three holes to tie the match and set up a shootout for the last five holes. Three more winning holes on birdies gave the Americans a victory.

On the final day when all 12 golfers from each team are paired in singles matches, Noh came out on fire against European stalwart Mel Reid, winning the first four holes for an early 4-up lead. Reid chipped away at the advantage, winning 5 and 6 to give Noh a 2-up lead that she carried through 13 holes.

The feisty Englishwoman did not go down without a fight. Wins for Reid at 15 and 17 gave Noh a tenuous 1-up lead going to 18. But with a pair of swapped bogeys on the final hole, Noh emerged the victor, finishing 2-1-0 in her Solheim Cup debut.

Noh’s first Solheim Cup competition was Saturday afternoon when she was paired with Altomare in fourball against major champion Georgia Hall and Leona Maguire, who turned out to be the star for the victorious European team.

Two consecutive birdies by Noh on Nos. 6 and 7 helped the Americans rally to go 1 up through the turn. Hall made a crucial birdie at 15 to regain the lead 1 up on the United States. The Europeans sealed the 1-up victory on No. 18 when Noh and Altomare failed to birdie.