CONCORD, CA—Hoping to finally achieve long-awaited improvements at Ellis Lake Park, the City Council authorized an application for a $6.72 million state grant at the Feb. 2 meeting.

The grant would fund design and construction through Prop. 68, the Parks, Environment and Water Bond Act of 2018. If the city is awarded the grant this summer, project completion is estimated for March 2025.

According to city engineer Kevin Marstall, Ellis Lake Park is the only city park that had substantial opportunity for renovation and met the two state requirements of ratio of park acreage per 1,000 residents within project site and medium household income within project site.

“The meetings were all well-attended, ranging from 30-40 attendees participating via Zoom with Spanish translation provided,” Marstall said.

The council approved submitting Design Map 2, which garnered 56 of the votes from residents.

All the design concepts included leveling of the mounds and contour grading for a continuously level path, something George Fulmore of the Monument Democratic Club has long advocated.

“I’ve always found the path at Ellis Lake Park to lack safety. There has not been a line of sight to others when walking around the lake,” he told the Pioneer.

The grant would pay for lake dredging, removal of excess trees and vegetation in portions of the park. It also includes fencing or vegetation as a safety barrier around some areas of the lake.

Marcell noted that minor alternations could be made after grant approval but not “whole-scale changes.” 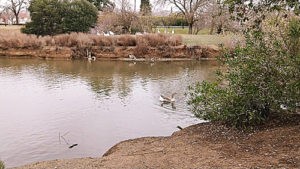 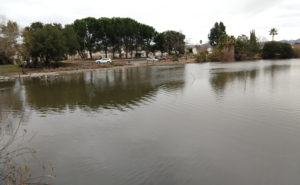 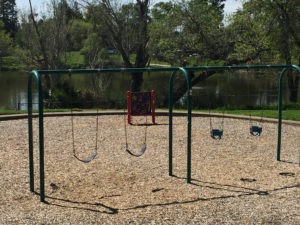 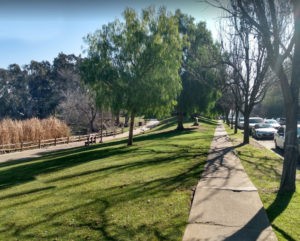 Representatives from Monument Impact and First 5 – as well as many residents – spoke out about the unintended consequences of increased housing costs and potential displacement of current residents.

“Monument families, who are disproportionally impacted by housing and economic instability and racial and immigrant injustice, are especially vulnerable to this displacement,” said Rhea Laughlin of First 5.

To help combat the problem, the two groups proposed including a provision that the city form an anti-displacement task force. However, Marstall said the city could not modify the state grant application template.

Councilwoman Laura Hoffmeister agreed. “I don’t want to muddle up anything going to the state,” she said. “The state gets very very persnickety about their templates. Once you add something in, modify something, change something, it goes on the back burner and we lose the competitive edge.”

The council approved Vice Mayor Dominic Aliano’s suggestion that the issue be sent to the Policy Development & Implementation Committee, comprised of Aliano and Mayor Tim McGallian.

“Creating infrastructure improvement as it relates to displacement does concern me,” Aliano said. “I think this is a conversation that we need to have. Because I want to make sure that these residents who participated in this process get to enjoy what they helped create.”

Cora Mitchell echoed that thought during public comment. “I think it would be really sad to leave them with that fear, wondering if they shot themselves in the foot for participating.”

In 2017, the city installed restrooms and expanded the play area by about 2,900 sq. ft. The expansion includes benches, lighting, fencing and play structures for young children. The city used Measure WW park bonds and Measure Q sales tax revenue for that project.

Marstall told the council he is optimistic about the grant approval. “I think we have a fair shot at this. It’s a good project.”