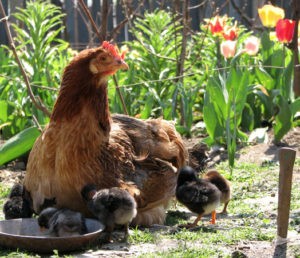 With nods to Mother Earth, the Clayton City Council voted 5-0 on Nov. 5 to allow residents to keep up to 10 hens – while banning the use of glyphosate on city property at a previous meeting.

Several council members acknowledged that many residents are already raising chickens in town.

“I get regular comments, at least one a week, that say: ‘Why can’t we have chickens? When are you going to let us have chickens legally?’ And these are mostly from folks who went ahead and did it,” said Councilwoman Julie Pierce.

Councilman CW Wolfe asked if those who already have hens and coops will be grandfathererd in under the new ordinance, but interim Community Development Director David Woltering said that is not the plan. Interim city manager Joseph Sbranti emphasized that enforcement would be complaint-driven.

“If neighbors are getting along well, we’re not going to go out seeking areas where there may be someone that is out of compliance. But if someone does complain, this would be the guidelines that we are holding them to,” Sbranti told the council.

The staff report indicated that “the current level of code enforcement would be sufficient to enforce the standards.”

The council is expected to finalize the ordinance on Nov. 19, and it will take effect 30 days after that. The plan allows for up to 10 hens – no roosters – with one hen per 1,000 sq. ft. The rules apply only to single-family homes in residential neighborhoods and in Planned Development Districts.

Enclosures can be up to 100 sq. ft. in area and 8 feet in height. The original proposal called for a max of 12 feet, but the Planning Commission recommended lowering the height to limit neighbor views.

To accommodate smaller lots, the planning board also suggested 10-foot setbacks from rear and side property lines – instead of the 20 feet proposed by city staff. Any enclosure must be 50 feet from the front property line.

“I think the Planning Commission recommendation balances the opportunity for property owners to keep a small number of hens for hobby purposes and, at the same time, mitigates potential impacts to neighbors,” said Woltering.

Although no residents spoke at the meeting about the ordinance, several council members said they’ve heard positive feedback.

“I’ve received several emails and saw some chat on social media overwhelmingly supporting the idea that we allow chickens in this rural community of Clayton,” Wolfe said.

“It’s time we do this,” Pierce said. “It has become far more commonplace throughout the county.”

Clayton has been one of only three cities in Contra Costa County that don’t allow hens in single-family residential areas. Rules in neighboring Concord accommodate up to 12 hens, depending on lot size.

With its new ban on glyphosate, the city of Clayton joins government agencies around the world that have stopped using the weed killer in Roundup. In 2015, the World Health Organization classified glyphosate as “probably carcinogenic in humans.”

In the past several months, Clayton had already limited applications to areas where pedestrians are unlikely to be found – such as steep hillsides adjacent to roads and road median areas. The city stopped using the product entirely last month, anticipating the council’s Oct. 15 vote to ban it for 18 months.

Councilman Jim Diaz was among those who talked about pending lawsuits regarding glyphosate – although not specifically in Clayton. “I can’t go very far on television without seeing some law firm that is soliciting people to come forth if they’ve had a negative experience. I’m glad to hear the city has stopped using it,” Diaz said.

“When I look at the evidence, the science is somewhat complicated, but the lawsuits are not,” noted Councilman Jeff Wan. “Purely based on a risk-avoidance focus, I think that decision is pretty easy to make. It’s gonna be more work, sorry about that, but I think it’s worth it.”

In a report to the council, Sbranti estimated the fiscal impact at $25,000 a year. This includes alternative weed prevention methods such as hand pulling, cutting weeds at ground level, and using pre-emergents and organic weed and grass killers. In spring 2021, staff will report back to the council on the status of city landscaping.

“It is anticipated that weed control may be less effective and result in more unsightly weeds in public areas,” Sbranti wrote in the staff report. “The actual impacts would be more easily quantifiable after a period of time when staff has had one or more grow seasons to experience maintenance without glyphosate.”

Resident Brian Buddell spoke in favor of the ban, noting that he brought the issue to the council’s attention earlier this year. He said many regional agencies with land around Clayton have also banned the substance – including the Mt. Diablo Unified School District and the East Bay Regional Park District.

1 thought on “Clayton OKs chickens but no roosters; bans Roundup”