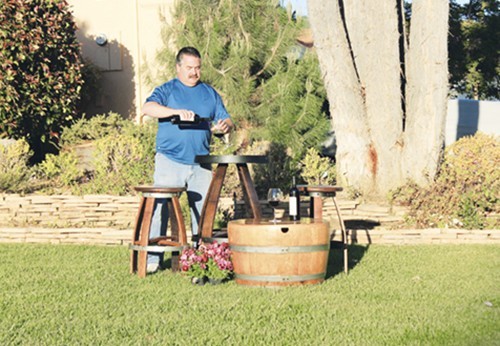 Local artists find their inspiration in people and places of Clayton.

This year’s Clayton Art and Wine Festival, coming May 4 and 5, offers local families and out of town visitors alike exactly what its name says: art and wine.

But those in the know – from Mayor Julie Pierce to local vendors to savvy residents – will tell you there’s more to the Art and Wine than an afternoon of chardonnay, watercolors and sunscreen.

Now on its 18th year, the festival offers a place for locals to shop and stroll, but also to reconnect – and benefit their community – by doing so.

Frank Quadrato loves a good crate of Cabernet. A barrel, and occasionally, of course, a glass. Quadrato, whose Restoration Barrel Design booth will be at the festival, has turned his love for wine into both an art form and a profit center. Using the wood from the crates and barrels he gets from local wineries, and corks donated from local merchants like Ed Moresi, he and his wife Lisa create everything from clocks and wine racks to chairs and tables, many still carrying the names of local wineries.

Quadrato first began designing waterfalls made from wine barrels as a way to make money to help his son buy an old truck to restore.

“We made $3,500 and bought the truck,” he says. Parts were needed next, and so they made a few more. Not long after, on friends’ urging, Quadrato entered the festival and his products became a hit.

Quadrato’s children are all grown now, but he continues to create. His work has shown at the Clayton Art and Wine Festival and Oktoberfest, as well as down the road at a Lafayette event, but Quadrato prefers the Clayton show, populated by his friends and neighbors.

“Our community is down there to have a good time and to shop and buy stuff,” he says. “And then we have a barbecue at our house afterwards.”

Clayton Mayor Julie Pierce says that in addition to having a good time, attendees of the festival are benefitting Clayton with every dollar they spend.

In past years, the festival, sponsored by the Clayton Business and Community Association, has made over $100,000, which it turns right back around via grants to the civic activities. Pierce listed college scholarships for local students, the gazebo in The Grove, and the benches that line Main and Center Streets as just a few of the benefits the CBCA has donated from the proceeds.

“It’s the community giving back to the community,” says Pierce, “and we’re having a good time at the same time.”

Don Kent’s love for the area can be seen through the lens of his camera. Kent has travelled the country, first in the military, and following that during his career in telecommunications. He’s seen many places, but it’s Clayton that captured his heart.

“We got to know a lot of the community,” he said, when he and his wife, an elementary school teacher, came to the area from St. Louis in 2001. “We became friends with teachers, community people, vendors, the people of Clayton. We like the small town-feel and what it offers.”

His perspective on the area can be seen at the Art and Wine Festival at his booth, Don Kent Photography.

“When you put your wares out for display, you don’t know how people will react,” he said. But that first year, he was pleasantly surprised to find he was welcomed by festival organizers and other vendors alike.

Although his images span the world, from the Napa Wine country, Yosemite National Park, to as far away as Australia, Kent says he especially enjoys shooting the trails of Mt. Diablo and even downtown Clayton.

“Even the mundane shots, like the Clocktower, remind me of Norman Rockwell, a little bit,” he says.

“But you also listen, and you hear everybody talk about what a great town Clayton is.”