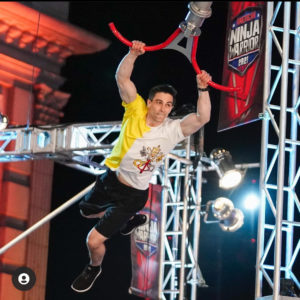 CONCORD, CA (Aug, 30, 2021) —This week, the national finals for Season 13 of NBC’s American Ninja Warrior competition begin in Las Vegas. Among the athletes who qualified for the finals will be Concord resident Sean Bryan.

ANW pits athletes of various backgrounds, including rock climbing, pole vaulting and gymnastics against each other through a series of physical obstacles. The challenges test strength, balance, speed and endurance of the athletes. Competitors range in age from 15 into their 60s, and men and women compete against each other on the same course.

In 2016, Sean Bryan started competing during Season 8. In Season 10, he came in second, just missing the $100,000 first prize. Also that year, he hit more buzzers than any other competitor in the tournament. This means he completed more courses than other athletes, who fell or were unable to complete a course challenge before the end.

In his final qualifying round for the 2021 season, Bryan completed the full course with blood streaming down his face after injuring himself on one of the obstacles. The device, called the Drop Zone, smashed him in the forehead leaving a bloody gash. Though visibly shaken and wiping blood from his eyes, he continued, finishing with the third-fastest time of the evening.

Stage one of the finals aired Monday, Aug. 30, on NBC. You can also watch it on streaming services such as Hulu.

Bryan is an executive manager at Traverse Fitness, a ninja training gym in Richmond, CA.

Update from Aug. 30 show (Spoiler ahead)

Sean competed as one of 38 ninjas in the Aug. 30 national finals stage one. He finished with the 4th fastest time. He and 11 other athletes advance to stage two. Next Monday, stage one competitions continue to determine the full roster of finalists who will compete against each other in stage two.