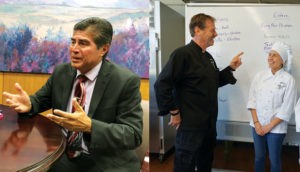 While looking back over 2020 to develop our school news year in review, two of the biggest stories have yet to be played out when we prepared to publish this December issue of The Pioneer. So we’ll just have to grade our list as “incomplete.”

Stalled salary negotiations between the teachers union and Mt. Diablo Unified School District and the decision of the Contra Costa County Office of Education board for the renewal of the charter for Clayton Valley Charter High School have been right at or near the top of a another busy year in the area’s classrooms and administrative offices.

Clayton Valley Charter is seeking another five-year renewal of its Charter and the Concord school will learn its fate from the Contra Costa County Office of Education board this Wednesday evening. Just as they did at an Oct. 16 CCCOE meeting at Pleasant Hill Middle School to question CVCHS executive Director Jim Scheible, supporters of CVCHS and its charter renewal petition are expected to fill to overflow the middle school multi-use room this week.

The school has been proactively promoting its charter renewal effort in traditional and social media. Officials can hope they are as successful as their football team that pulled off a Northern California championship victory last Friday on the Concord campus.

The charter school made a point at that meeting saying their teachers are the highest paid in the county. In the audience were new MDUSD superintendent Robert Martinez and most of his board of trustees.

The administration of the large local district of nearly 30,000 students has been at an impasse over a new contract with its teachers union. The last agreement expired over 500 days ago. Mt. Diablo Education Association and the district have been in mediation with the most recent meeting last week.

The teachers and supporters filled Monte Gardens Elementary School’s multi-use room at the end of October to make their frustrations known to the MDUSD Board. There have been some veiled and not-so-veiled discussions of a strike should this mediation effort fail to result in a new contract.

Martinez was unanimously selected by the board as their choice to replace popular superintendent Nellie Meyer, who surprisingly took a new position across the bay late last school year.

The new superintendent took over in August as the new the school year began. He had been with the Fairfield-Suisun Unified School District in a variety of positions for 32 years.

The busy year for MDUSD also saw planning for the use of the $150 million Measure J bond funds. The measure passed last November.

Also, the board finalized the maps for five trustee areas within the District for State-mandated district elections for trustees beginning in 2020. The first two seats to be filled under this new system will be contested without an incumbent seeking reelection.

Carondelet gave its excited student body a sneak preview of the $16 million Jean Hofmann Center for Innovation on the Concord campus last month. Following 270 construction days, outgoing school president Bonnie Cutter and student body president Natalie Ionescu welcomed the students to look through the two-story I-Center building that will serve as the hub of the school’s STEM program for generations.

Cotter is serving out her contract through the end of the school year before relocating full time to her family home on the East Coast. She is telecommuting this year while CHS conducts a nationwide search for her successor.

Mt. Diablo High School started its culinary program over 30 years ago and students and faculty operated the Serendipity Restaurant in the former metal shop building on campus. Over a year and a half ago it was apparent the facilities and equipment needed upgrading.

This month Serendipity is ready to re-open with construction complete and all the applicable approvals and permits secured. The proud staff is hosting a preview this week and will have its traditional holiday lunch menu open to the public Dec. 17 and 18.

After the winter recess Serendipity will be open starting Jan. 8 for lunch and its new morning café service.

Ygnacio Valley High also has made excellent use of a school building that formally held shop classes. The Concord campus unveiled its Innovation Lab in September that houses the third year of Ygnacio’s Project 212 Robotics program and is now the hub of the school’s STEM programs.

The school hosted an opening potluck where leadership lauded the major buy-in from local businesses and service organizations to bring about first the robotics program and now the lab.