CONCORD, CA—Drawing from a pool of community resources, the city council approved a plan that will allow residents to stay in the swim of things in Concord Community Pool for the next three months.

Due to the budget shortfall brought on by the COVID-19 pandemic, the city decided in June to close the pool on Cowell Road from November through January to save $67,000. The nationally-recognized Terrapins Swim Team, the main user of the Olympic-size pool during those months, made plans to practice at Northgate High School instead.

“However, in August, there was a change in the fall high school sports schedule which delayed the start of all fall sports [including water polo]. As a result, the Terrapins alternate facility was no longer available,” Concord Parks and Recreation program manager Kathie Leavitt told the council during a virtual meeting last month.

So, the Terrapins approached the city with a way around the budget shortfall and staff dove in to make it work. Under the agreement, the swim team will pay the city $30,000 – $19,095 more than its standard fee to cover their practice time in the pool.

In addition, the Drivers 680 Water Polo Association will pay Concord $15,000 for three months of pool use. That group has used pools at San Ramon and Las Lomas high schools, but co-founder Matthew Mundelius is excited about the addition of Concord.

“We’ve been looking to expand and offer water polo in other communities,” he told The Pioneer. “Our hope is to build up the water polo community in Concord and help get the young going.”

To fill in the financial gap, the city will add a 15 percent surcharge to all swim pass and daily lap swim purchases during this period. Leavitt said the fee would be 69 cents to $1 per swim, depending on the type of pass. 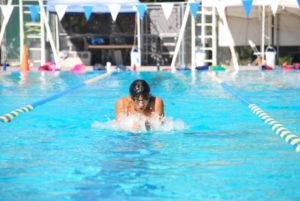 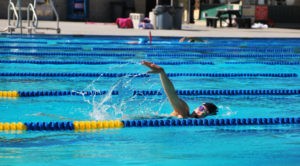 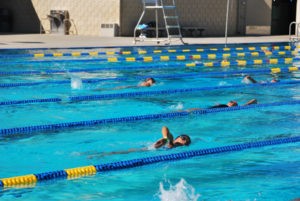 “There has been significant community interest to find an appropriate way to keep the pool open for lap swimming while realistically addressing the city’s financial challenges,” Leavitt said. She pointed out a change.org petition that generated more than 1,000 responses in favor of keeping the pool open, even if it meant a temporary increase in fees.

“From a parks and recreation perspective, this opportunity presents a win-win scenario for the community,” Leavitt said of the three-tiered approach.

Several council members had referred to the pending pool closure during an Oct. 13 discussion of a proposed bicycle playground at Concord Community Park. Although the Contra Costa Transportation Authority would build the playground, the city of Concord would fund ongoing maintenance.

“We’re not in a good position to take on additional costs when we’re already telling the public we have a strain in opening up an existing amenity,” Councilwoman Laura Hoffmeister said.

Council members also questioned whether that park was the right location for the bicycle playground. They directed staff to work with CCTA and the Street Smarts Diablo Region program on alternative plans and bring the issue back to the council.

L-shaped Concord Community Pool opened in 1967 and has been renovated several times over the years. There is a 50-meter competitive pool with 25-yard formats in two different parts of the pool for high school and recreation competition.

The Concord Swimming Championships for the area’s recreation swim teams as well as the high school North Coast Section meet have been fixtures in the pool for many years, although neither was held this year due to the pandemic canceling their swim seasons.

The Terrapins started training there in 1989, following the pool serving as the home of the Concord Swim Club and then the Concord Pleasant Hill Swim Club competitive programs. The Concord Swim Club won multiple National AAU water polo championships for founder and Cal coach Pete Cutino who lived near the pool. Olympic gold medalist swimmers like Matt Biondi and Nancy Hogshead trained with the local teams.

Concord was center of swimming world in 1974 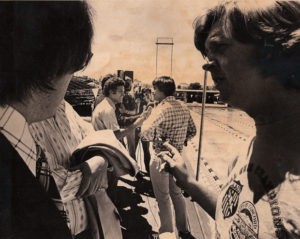 In 1974, the Concord pool was the center of the swimming world hosting the AAU Senior National Swimming Championships from Aug. 22-25 and the legendary United States vs. German Democratic Republic dual swimming and diving meet the following weekend.

The two meets resulted in 20 world and 35 American swimming records being set in Concord Community Pool.

The highlight of the USA vs. GDR (East Germany) dual meet was the backstroke race between the immortal German star Roland Matthes and America’s John Naber from Woodside in the Bay Area who swam for the University of Southern California.

Matthes had won the 100 and 200 back gold medals in the 1968 and 1972 Olympics and he had not lost a backstroke race since April 1967 when he came to Concord. Naber won their showdown in the highlight of the two weeks of swimming in Concord as the USA team defeated the “invincible” East Germans.

Matthes died last December and Naber remembered his idol and friend: “In the summer of 1974, the East German swimmers came to California for a USA/DDR dual meet, the two swimming superpowers meeting for a serious showdown. At that time, Matthes had been undefeated in backstroke races since April 1967. I beat him in Concord, and I could not contain myself. I was overjoyed and hopped all around the shallow pool. Matthes allowed me to hug him and he patted my head in congratulations. Like an elder statesman, he seemed to pass the torch with elegance.”

Two years later Naber won both backstroke races among his four gold medals at the 1976 Montreal Olympics. Naber said Matthes revealed to him many years later that he had considered defecting from Communist East Germany when he competed in Concord.

Following the meets, the bible of swimming, Swimming World, had a front-page editorial in the October 1974 issue: Concord – six days of swimming never equaled in the United States. That was the unanimous opinion of more than 35,000 spectators, competitors and officials who participated in the 1974 AAU Long Course [50-meter] Championships and the United States/German Democratic Republic dual meet. Concord captured the hearts of the swimming world.”