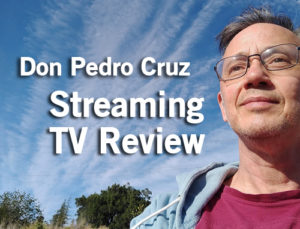 So you just feel like The Marvelous Mrs. Maisel is not for you? I don’t blame you. I resisted checking it out when it debuted in 2017. Even after a couple of seasons I ignored all the awards and rave reviews it got and passed it by. I’m not sure why.

I finally gave in around season 3 and much to my surprise found that Mrs. Maisel isn’t just, as her manager Susie Myerson puts it, “a dollop of whipped cream that grew a head.” Rachel Brosnahan’s Mrs. Maisel is indeed marvelous… with a little help from her friends.

The first episode quickly sets up the premise, opening on Miriam Weissman’s 1958 wedding to Joel Maisel (Michael Zegen) in New York City. Her natural charm and ease at the microphone shines during a speech at the reception.

A few years later, Midge has embraced being the best 1950s housewife. She gets up early to do her hair and makeup before pretending to wake up later looking amazing for her husband. She also throws herself fully into supporting Joel’s dream of escaping his dull office job to become a stand-up comic. This includes helping punch up his jokes and bribing club managers with perfect brisket to get him better time slots for his act. But Joel doesn’t quite have what it takes.

Then one night, he abruptly abandons Midge and their two kids. Midge’s perfect life is instantly turned upside down. She ends up delivering a drunken rant about her predicament at a local open mike, where manager-wannabe Susie Myerson (Alex Borstein at her prickly best) recognizes that Mrs. Maisel has the goods to become a star.

Next, Midge gets arrested along with comedian Lenny Bruce, and the two have an enlightening conversation. After her night in jail, Midge decides that maybe a career on the stage might be for her after all.

The series follows Midge as she tries to break into show biz, with Suzie’s help, throwing herself into it with the same drive and focus that had once made her a model housewife. It does this without letting us forget that, yes, she’s a privileged rich white woman, but in the ’50s, even that will take her only so far. Despite constant pressure to find a new man and get back into the kitchen, her stand-up ambition takes over.

But Maisel goes beyond one woman’s struggle to create a career at a time when, for many women, the only options were housewife or secretary. The show brings in lots of endearing characters, fully formed with their own struggles and dreams. As Midge breaks out, others around her also show signs of wanting more than 1950s America offers.

Midge’s and Joel’s parents provide lots of comedy gold. Almost every conversation in the show sparkles with quick-witted banter. The sharp writing and fast pace ensure the plot never drags. A pair of Season 2 episodes that take place during a vacation in the Catskills stand out, filled with laughs but punctuated by a somber meditation on forgiveness by Midge’s ex Joel and new love interest, Benjamin.
Besides the writing and acting, the show’s visuals stand out as well. The costumes (notably the hats) and scenery dazzle throughout.

The camera work is mesmerizing. One eye-popping shot in the first Catskills episode delivers a bird’s-eye view of a group of ladies exercising with hula hoops, their sinewy shadows dancing across a canvas of bright green grass.

The first three seasons have far too many highlights to describe. Fascinating characters come and go. Many, like Midge, are desperate to reach outside the box society has placed them in.

Jane Lynch shows up as aging (and unhappy) comic Sophie Lennon, balancing Midge’s rising star with her own fading one. Leroy McClain and Sterling K. Brown steal the spotlight for a while in Season 3 as charismatic singer Shy Baldwin and his faithful manager Reggie. Zachary Levi gives a powerful performance as Midge’s love interest Benjamin Ettenberg in Seasons 2 and 3. And an appearance by Wanda Sykes as iconic comic Moms Mabley makes a truly memorable mark.

Season 3 ended with a shocker. But we won’t have to wait long to see what happens next: Season 4 drops on Amazon Prime Feb. 18. Time to start bingeing the first three now.

If you aren’t ready to commit to four seasons of Mrs. Maisel but might enjoy a feature-length offering about a female comedian in the ’50s, I highly recommend Being the Ricardos on Amazon.

As a big Lucy fan, I had my doubts when early press mentioned the casting and content. But I disagree with the criticism and think that director Aaron Sorkin made the right call with Nicole Kidman and Javier Bardem (who have both been nominated for Oscars in these roles). They don’t mimic the real larger-than-life couple, but the story, centered around the taping of a single episode of “I Love Lucy” during the McCarthy era, captures the dynamic of this power couple’s relationship and immediately draws you into their layered, emotional drama.

Or maybe a contemporary comedian

If you can’t be bothered with decades-old morals and constraints, HBO Max’s Hacks might get your attention. Top-notch writing that’s both funny and smart drives this show that premiered in 2021.

Jean Smart is at her bitchy best as a modern-day Vegas comic who’s being put out to pasture because of her age. When forced to pair up with an aspiring young comedy writer, sparks fly. Season 2 should arrive later this year, so now’s the time to get started on Season 1.

Don Pedro Cruz went to film school before becoming a baker. He then got into publishing at several tech magazines in San Francisco before moving to the newspaper world as a graphic designer. He also writes stuff. Send comments to pedrocruzpioneer@gmail.com