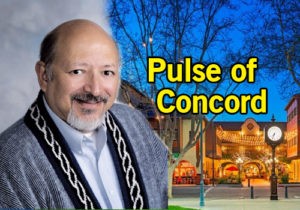 The Pulse of Homeless. When asked repeatedly about the top issues in Concord, I see a dance among homelessness, crime and roads as to who would lead.

Homeless individuals, or the unsheltered as the new description comes into vogue, are complex and this issue has many aspects that frustrate and confound those around us.

Here is a kaleidoscope of my views:

Contrary to some social media hype, the Concord Police policy during this pandemic is to leave encampments alone except when they provide safety, health and criminal concerns.

When there are concerns, there are generally multiple contacts with both PD and the CORE outreach group. Vandalism, fires, thefts, middle of night disturbances, pollution of canals and the like are going to get attention and people may be ordered to move.

Guidance from the CDC and other health groups is not a shield for criminal behavior. In one recent case, we had a Mormon church fed up with the antics of a group. Residents and neighbors united to bring peace to their area.

I visited an encampment in the Martinez Amphitheater run by Martinez Councilwoman Noralea Gipner and volunteers. It is unique in that it has written rules, such as 11 p.m. noise out, no visitors, locked fence though residents can go out, cleanup patrols, etc. It works for a prescreened group that is closely monitored seven days a week.

I am looking for something like that in Concord and need a group of seven day a week volunteers, an isolated location that has utility access and a screened group of maybe 25 or so people.

One of the flashpoints with neighbors and drive-by folks is the horrible blight of encampments, with garbage all over. There are groups of residents going out one day a month to clean their streets. I join several of them. How about a group of volunteers to clean up the encampments? But you have to be willing to do it in a nonjudgmental manner and not ask, “Why can’t they do it themselves?”

If you want it done, sometimes you just have to get out and clean up after others yourself.

People who live in their cars or RVs have some of the same problems as those in encampments. Again, it is not as simple as leaving them alone when there are negative interactions in the area.

Finding a place is another challenge. If the city would change its ordinance prohibiting it, would you allow one to park in your driveway and provide some relief from the stress of street parking? You could run an extension cord and provide water, etc. as needed. If you are willing to host one, let me know.

Likewise, it would help if your religious structure has a parking lot that members would monitor and take some responsibility for to provide some security.

The unsheltered and unstable

Negative interactions are a constant thorn in and around Todos Santos Plaza. We have seen individuals start a screaming match at fountains, a bench or tree. While clearly losing the argument, they are also unwilling to accept help.

Mental illness and addiction-induced actions provide the largest flashpoint with the public and undermine compassion for the whole category of the homeless.

There are also the roving folks with shopping carts, carriages, filthy clothing and unhealthy appearances who are walking billboards of their lack of housing. The ugly truth is that most in the public just do not want to see this and wish that they would just go away.

These are actually very few of the homeless, but they present the highest visibility. Many of the homeless do not want to be identified as such and are looking for ways out. Generally, the public never recognizes them because they look like us. They are us.

This is why we have a CORE group trying hard to channel the meager resources to them.

Under the COVID-19 orders, the mentally ill roamers are more of a problem than previously. Double so when they will not accept help and we cannot use the 5150 police power mechanism to at least hold them for 72 hours so that their episodic outbreaks may ease.

The city of Concord is providing rented hotel/motel rooms for 14 families, covering 39 individuals at last count. Including food, this is costing the city $3,000+ a month per room. This is unsustainable.

In the last column, I talked about the concept of taking in a family from the streets just as we have foster parents for isolated kids. Unfortunately, no one came forward.

These families may be candidates. Do we have any takers?

The city will struggle with this through the shelter in place, but we are broke.

The county has 140 rooms taken, including the entire Best Western, for four months. They have social workers onsite, etc., and that is costing more than $4,000 a month per room. This is also unsustainable but provides the best chance to keep the folks safe from spreading the virus.

Many of these occupants came from shelters such as on Arnold Industrial, which was set up more as a mass dormitory for homeless. That system is a breeding ground for COVID-19, which is why we opted for the highly expensive and unusual response of hotels rooms.

What happens afterward is a question that will give you a fever of brain drain.

There are families doubled up, living in cramped quarters. Adult children and folks sleep on couches and floored mattresses in rooms not intended for such use. I used to call these the invisible homeless, but my son calls them the under-housed.

They represent a massive number above the unsheltered and also represent a high health risk just from the cramped quarters.

Getting to the answers

There are more aspects that I could review, and the lack of funds and collapse of local government revenue is making things worse.

For now, let me ask again:

Let me know at EdiBirsan@gmail.com.

These are my opinions and observations and are not associated with official positions of the city of Concord, the Church of the FSM or any canceled sports league.

Edi Birsan is a member of Concord’s City Council. Write to him at EdiBirsan@gmail.com or go to his Facebook page, Pulse of Concord.