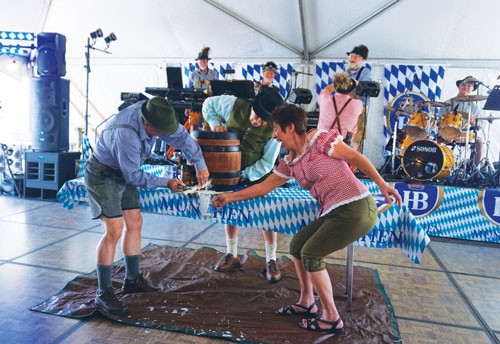 CBCA Oktoberfest event chair Maryann Lawrence catches the first stein as Gregg Kallenberger and Bill Safreed tap the keg, officially setting the 2016 festivities in motion. The annual two-day event raises over $70,000 which is donated back to the community in the form of grants for charitable causes, scholarships, local theater, schools and civic events.

Last weekend’s Oktoberfest may turn out to be the biggest yet in its 13-year history.

Saturday dawned sunny and mild promising enough heat to make a cold beer taste really good, but not enough to chase everyone home early. By noon, Main Street was already elbow-to-elbow and the biergarten tent was at its 500-seat capacity.

Despite the early crowds,  festival chair and Oktoberfest founder, Maryann Lawrence was unfazed. “It will all be fine,” she assured one frazzled volunteer. And, when it came time to tap the keg, a missing hammer was barely a blip on the radar. A block of wood was quickly produced and, after several whacks at the tap, the suds flowed, the band struck up “Beer Barrel Polka,” and the 13th Annual Oktoberfest was officially underway.

The Oktoberfest is one of two major fundraisers mounted by the Clayton Community and Business Association, the other being the Art and Wine Festival in the spring. Together, the festivals raise thousands of dollars which are returned to the community in the form of charitable contributions, scholarships, grants and civic events. The CBCA awards $25,000 in scholarships each year and the annual Tree Lighting and Mrs. Claus Dessert are both CBCA sponsored events.

CBCA boasts a membership of 180, but the events require armies of volunteers. More than 200 were needed for the Oktoberfest alone. Volunteers come from members and the schools and organizations that CBCA has supported during the year.

For more information or membership application, go to www.claytoncbca.org or call the CBCA office, 925.672.2272.