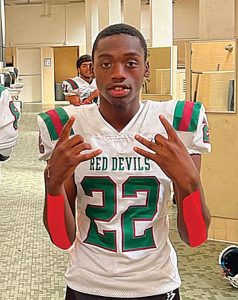 CONCORD, CA (Oct. 27, 2022) — When head football coach Donald James began planning for this fall season Ashten Adkins was not part of the roster Coach DJ envisioned. “Honestly [Ashten] fell into our lap. Not knowing anything about him, we gave him a shot” and the senior wide receiver and defensive back was a key in Diablo winning three in row after losing a trio of games to open the season.

Adkins played on the Dos Palos High School varsity last fall before his family moved to this area and he enrolled at Mt. Diablo, where he plans to graduate from next spring and the continue playing football in college. Adkins wants to study business in college, and he’s racked up some impressive numbers during the Red Devils three-game winning streak that carried over to their Diablo Athletic League opener over Ygnacio Valley in an offensive shootout.

The 5-10, 154 pounder has scored touchdowns this year both on offense and defense. His coach says the senior likes to say, “we got to get better and just have fun out there.” After football season ends Adkins wants to try wrestling and then in the spring will run sprints and do all the jumps in track and field.

The Pioneer congratulates Ashten and thanks Athlete Spotlight sponsors Dr. Laura Lacey & Dr. Christopher Ruzicka who have been serving the Clayton and Concord area for over three decades at Family Vision Care Optometry.

Do you know a young athlete who should be recognized? Perhaps he or she has shown exceptional sportsmanship, remarkable improvement or great heart for the sport. Send your nomination for the Pioneer Athlete Spotlight today to sports@PioneerPublishers.com