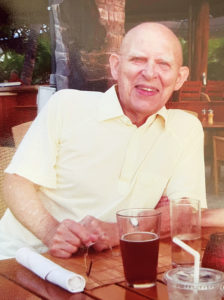 CLAYTON, CA — Early in the morning of Tuesday, August 3, 2021, peacefully in his sleep, our beloved father, grandfather, and great grandfather, Bernard (Ben, Bernie) Fichtenkort, left this world to join our Lord.

Born in West Point, Iowa, on August 24, the fourth son of five, to Christian Henry and Cecilia Jansen Fichtenkort, Bernie grew up during the great depression in a tiny German Catholic town in the middle of corn fields, gently rolling as far as the eye could see. He graduated from West Point’s St Mary’s High School in 1947 and then Marquette University in 1951 with a B.S. in Mechanical Engineering. Shortly after the start of the Korean War, Bernie enlisted in the Air Force. He served for two years, becoming a First Lieutenant, and stayed on as a reservist until 1966. Bernie earned an M.S. in Mathematics from the University of Iowa in 1954 and subsequently went to work for Standard Oil of Indiana. While there, in 1957, a fellow engineer introduced him to an attractive nurse in Chicago and it was love at first sight. He married Lillian Mary Holland in September of the same year, moved to California shortly thereafter and raised five children.

Bernie and Lil settled in Clayton in 1962 and immediately became active with St. Bonaventure Catholic Community. Over many years, they worked with other parishioners to help the young church grow into the vibrant place of worship it is today, making lifelong best friends in the process.

In addition to teaching Catechism, singing in the choir, and serving on the Parish Council, Bernie found time to found Clayton’s first Boy Scout Troop, Troop 262. An Eagle Scout since his teen years, he served as the Committee Chairman for its first six years and, through it, helped local charities such as the We-Care School for disabled children and the inaugural Clayton Fourth of July Parade and Celebration. He worked for and retired from the Fibreboard / Gaylord paper mill in Antioch as Plant Engineer and Maintenance Superintendent.

Bernie will be remembered by all who knew him for his quiet generosity, calming influence, and self-deprecating sense of humor. He was the unknown inspiration and strength behind many projects, mostly preferring to stay out of the limelight and taking joy from the endeavor’s success.

There was never any doubt Bernie placed love for his family above all else. He is survived by his brother James Fichtenkort of Vero Beach, FL (wife Paula), son John Fichtenkort of Modesto (wife Shelly), daughter Mary McFarland of Clayton (husband Kevin), daughter Jean Fichtenkort of Berkeley (wife Wendy Heffner), daughter Therese Hathaway of Wichita, KS (husband Jay), and daughter Sara Larose of Orinda (husband Jonathan). Bernie was also deeply loved and will be missed by his eleven grandchildren, his seven great grandchildren, and his extended family and many dear friends.

Bernie is inurned at the Oakland Diocese Cathedral of Christ the Light Mausoleum. In memory of Bernie, please humbly share a gift of service with another.