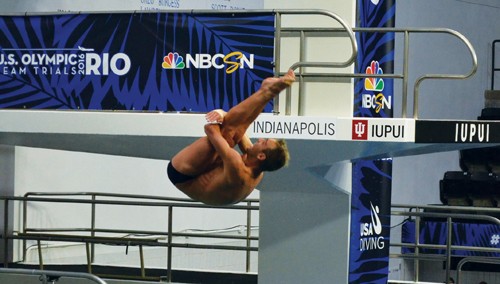 He’s not a Stanford freshman just a year out of De La Salle High like he was in 2012 when as a 19-year-old he went to the London Olympics. Clayton’s globetrotting Kristian Ipsen is now one of the veterans on the United States Olympic diving team prepping for the Summer Games in Rio de Janeiro starting in less than a month.

Ipsen won a bronze medal in the three-meter synchronized event four years ago with partner Troy Dumais who was taking part in his fourth Olympics. Ipsen and Dumais lost out on a chance to compete again when they finished second at the recent Olympic Trials in Indianapolis.

Showing the maturity and experience he’s gained over the past quadrennial Ipsen, now 23, was able to put aside that disappointment and resultant pressure to have two excellent days and win the Olympic Trials 3M springboard competition. He’ll be competing against the world’s best men in that event Aug. 15-16 in Rio.

Brushing aside the widespread fears about the Zika virus (“our team doctor has lots of bug spray”) Ipsen is looking ahead confidently to competing in Rio at the outdoor Maria Lenk Aquatics Centre where he dove in February in a World Cup meet that served as the qualifier for the US in several events.

“I’m used to diving outdoors (at Stanford). The weather elements seemed to bother many of the divers in Rio,” Ipsen said last week after a one-day visit home in Clayton as he traveled back to Palo Alto to continue his training with his coach of one year, Oleg  Andriyuk of the Stanford Diving Club.

He’ll be joining up with the other nine American Olympic divers for a final camp later this month before heading off to Rio where Ipsen is going to “soak up the entire experience” including marching in the Opening Ceremonies.

The Olympic Trials were a roller coaster for Ipsen, which matched the last 10 months or so of his diving journey since he graduated last fall from Stanford.

He suffered from pain in his right hand for several months during a crowded 2015 diving schedule that included collegiate, national and international competitions. Finally at the end of September it was discovered he had a fracture, spent five weeks in a cast and two more weeks in a splint. This was all in the lead up to the Winter Nationals last December when the 2016 US National teams were being determined.

He was finally able to dive without any impediments for two weeks before Nationals and took first in both individual and synchro 3M springboard. That landed him on the National team and early this year he competed in Rio, Beijing and Dubai. He won his first-ever senior level individual international medal with a bronze at the World Cup in Rio including beating Olympic contenders Chao He of China and Evgenii Kuznetsov of Russia.

Then just a couple months before the Trials USA Diving decided to break up the synchro team of Ipsen and Sam Dorman, citing their less than optimal results in international meets this year. They put Dorman with Michael Hixon and reunited Ipsen and Dumais.

Unfortunately Dumais suffered an injury that halted any training with Ipsen. They finally got to dive together just before Trials but had a couple missed dives in the preliminary and semi-final rounds that put them too far behind the Dorman-Hixon team to overcome in the final six dives. There are only eight teams in synchro diving events at the Olympics and a country gets only one entry.

“Troy was feeling better as the meet went along and I think if he had another two-three weeks of healing we would have had a great chance of winning the trials. In the finals we had our best scores since London,” Ipsen said.

Unlike most competitions, at the Olympic Trials the scores from preliminary and semi-final dives are combined with the finals scores. Ipsen and Dumais won the finals session but they were too far behind Dorman-Hixon to win over the three sessions.

The synchro event’s first two sessions were on Saturday, June 25, and just two days later Ipsen was back in the pool for the Monday individual springboard prelims and semi-finals. “Four years ago I would have been pretty discouraged and nervous [after the synchro misses]. This time I was super motivated and didn’t look at it as ‘do or die.’ I was mentally alert all week.”

He landed some excellent dives and moved into first place with his final two semi-final dives, putting him seven points ahead of Hixon but with a substantial 116-point lead over third-place Matt Anderson. Four years ago Ipsen missed a couple dives late in the 3M finals and slipped to third place, missing out on an individual Olympic berth.

With two Olympic spots at stake Ipsen and Hixon were able to glide through their final six dives. Ipsen ended up 67.3 points over the runner-up and 152.6 points ahead of Anderson in third. Ipsen says he will be adding two more difficult dives to his list for Rio as he competes against the world’s best where degree of difficulty is very important in the scoring.

The Clayton diver had a couple dozen fans in the Indianapolis Trials audience including his parents, sister, girlfriend (and fellow Stanford diver) Lilly Hinrichs, family and friends.

The Olympics will be televised on NBC and its related networks. Rio is four hours ahead of Pacific time so some events will be early in the morning here