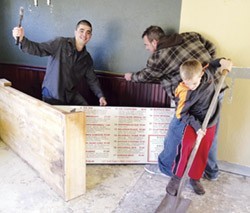 Canesa’s Brooklyn Deli is back in town.

The popular deli, which used to share space with Cup O Joe on Main Street plans to re-open its doors in early January in the space recently vacated by Hair by Jim.

“We’re baaaack,” crowed John Canesa who has been working as a supervisor at the Plate & Vine in the Concord Hilton since closing the Main Street location in November 2011.

The menu is the same, the only thing different will be the decor.

“It’s gonna look like a New York subway station,” he said before correcting himself with a laugh. “Nah, I mean a New York train station.”

The new place will have counter seating inside and picnic tables outside.

Canesa will keep his night job at the Plate & Vine and the deli will be staffed by family members – his brother, father, wife and mom who “makes our legendary meatballs,” said John.

Canesa hopes to be open by early or mid-January, pending all health department approvals.

The deli isn’t the only new business coming to town. Damien De la Rosa, owner of The Harvest Market in Walnut Creek has signed a lease on the corner space in Flora Square. According to Councilman Howard Geller, who was instrumental in bringing the restaurant to town, the family restaurant will feature healthy, upscale Mexican food and will be open for breakfast, lunch and dinner. Geller expects De la Rosa to be open sometime in the spring. De la Rosa was not available for comment.

“It’s happening,” said Geller. “Just proves Clayton is waking up and on its way.”