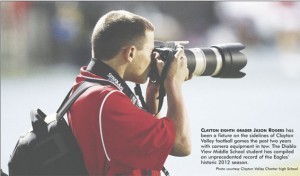 “Jason is unbelievable! The most unselfish and reliable kid I have ever met!” Clayton Valley Charter High School head football coach Tim Murphy wasn’t talking about one of his champion Eagles players or even a student at the Concord school. Instead he was describing an unassuming Diablo View MiddSchool student, Jason Rogers.

The Clayton eighth grader has never played organized football but has been observing the Clayton Valley program the past three years while his older brother Justin Rogers has been playing for the Eagles and performing quite well. Justin has been a first team All-Diablo Valley Athletic League center during his sophomore and junior years.

Rather than just being a fan in the stands, Jason Rogers started photographing and videotaping Clayton Valley games last year. They were so well received that when Murphy took over the coaching reins in the spring word quickly got to him about this budding Bud Greenspan in his midst.

LEGACY OF A MAGICAL SEASON

It started in the heat of the summer when Jason photographed and videoed every team session. He was barely noticed yet was as omnipresent as any of the coaches or players. And his legacy will be remembered for decades to come in the images he captured that CVCHS players, parents and coaches will be sharing forever. The Eagles went all the way to the first ever State Regional Bowl Game two weeks ago in Stockton and, thanks to Jason Rogers, there is photographic and video evidence of every step of that history-making journey.

“He filmed everything we did this year. He filmed practices, games, (summer) passing tourneys, pasta feeds and anything else we attended,” Murphy says. Team parent Tony Fuentes mentioned that the coach secured CVCHS logo gear for 14-year-old Jason and also got him equipment to make the game videotaping easier to do. He photographed daily practices for hours each day. For the weekly game he would download his video of the game in order for the coaches to have them ready for Saturday morning film sessions with the coaches and players. One Friday night after getting home from Napa, Jason had problems with the download so he stayed up until it was completed at 7 a.m. for the 9 a.m. film review.

Team parent Lenore Nelson says, “It is not too often that a young person finds a passion and pursues it with the time and dedication that Jason has given to CVCHS football. His efforts proud to get to know this young man.”

Come next fall when Jason enters CVCHS he’ll be especially time-challenged if he wants to keep up his photography pursuits since he plans to follow in his brother’s footsteps and play football for the Ugly Eagles. He says science and art are his favorite school subjects.

He is a Boy Scout who has enjoyed photographing his backpacking trips in the Sierras as well as the beautiful scenery around Mt. Diablo. As a scout he plans to complete hiking the entire 210-mile John Muir Trail, which passes through Yosemite, Kings Canyon and Sequoia national parks. Since Jason says he “loves to take pictures of outdoor scenery” the Trail seems like the ideal setting for him.

He favors Canon digital camera and video equipment. Jason’s uncle Stu Jossey is a newspaper photographer in Manteca and Tracy who’s taken photos at many 49er and Raider games. He’s given his nephew tips on shooting sports action, an acquired talent. Jason uses Adobe Premiere Elements for editing on his PC. Last year he did a 12-minute season highlight film for the 2011 CVHS football team. He says his final video capturing the 2012 season will be 30 minutes in length. Proud parents, mom Julie Nelson, president of the local Weichert Realtors, and dad Jeff, a manager with ClubCare, made sure their youngest son got to all of his assignments.

This spring Jason will participate in his fifth year on the St. Bonaventure CYO track and field team (long jump, high jump, mile, 4×100 relay). He’s also looking ahead to high school football, track and photography classes. He’ll probably be able to give his fellow photo students some tips.

Besides examples of Jason Rogers’ photography in this issue of the Pioneer, much more can be found at www.claytonvalleyfootball.com.